Going for the Gumbo

This year marks the 50th anniversary of the New Orleans Jazz and Heritage Festival, a massive two weekend celebration of the music and culture of the city and the surrounding region. I have been attending regularly for years. At its core, the festival provides an opportunity to see great performers playing wonderful music. The musicians range from headlining national pop stars to relatively unknown local artists who usually play at the club around the corner; from national acts to bands made up of students from local high schools and universities (a not insignificant number of the former evolved from the latter). In addition, the festival showcases the work of visual artists and craftspeople, as well as parading groups of Mardi Gras Indians, Social Aid and Pleasure clubs, and much more. All of this makes for a dazzling attempt to crystallize the contours of the artistic culture of south Louisiana. It is a self-conscious attempt to put that culture on display, to celebrate, venerate, and preserve the things that make the region distinctive.

And then there is the food. For many people, Jazz Fest is as much a food festival as it is a music festival. Your ticket, of course, buys you entrance to the festival and with that you can hear as much music as you can fit into your day. The food, produced by a wide range of local vendors, costs extra. But the food is as carefully curated by the festival organizers as the music. The vendors are not the circuit-riding professionals of state and county fairs. They are local restaurateurs and caterers, along with a few talented

amateurs, who often produce special dishes specifically for Jazz Fest. The array of foods on offer—from classics of Cajun and Creole cooking, to Vietnamese, Latin American, and Middle-Eastern specialties—provides an idea of the region that may be more diverse than the music itself.

There are people who plan their approach to the music schedule weeks in advance. There are also people who approach the food with similar careful strategizing. Emphasizing this food-focused view of Jazz Fest, Ian McNulty, a food writer at the Advocate newspaper, created a guide for such people this year that mimics the layout of the music schedule.

A lot of us start our annual Jazz Fest observances with a specific dish. When I get to Jazz Fest, before even thinking about which bands are performing, I seek out the pheasant, quail, and andouille gumbo from Prejean’s Restaurant. The dish is part of our family history. When my wife was pregnant with our now 18-year old daughter and fighting first-trimester nausea, she nevertheless insisted on only one Jazz Fest food: 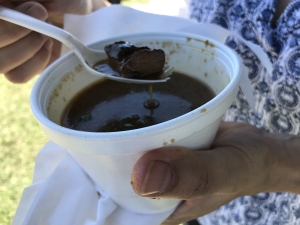 Prejean’s gumbo. This is a dark and smoky gumbo, filled with chunks of meat, served with rice. Eating at Jazz Fest is best approached as a team activity, so I share the gumbo with whoever is with me (usually my wife), as we comment on the quality of the year’s batch. The strong flavors prepare us for a day of music, food, and fascinating sights.

Gumbo, of course, is one of the key Louisiana dishes. Prejean’s gumbo is Cajun. The use of a very dark roux is something people often associate with Cajun gumbos, although that seems less indicative in this case than the vendor. Prejean’s is based in Lafayette, about 140 miles west of New Orleans and represents itself as a Cajun restaurant. It is a big restaurant, full of taxidermy alligators and other memorabilia meant to evoke Cajun culture. The food is good and they have excellent gumbos on the menu. But the pheasant, andouille, and quail gumbo is not on the restaurant’s regular menu. For that, you have to come to Jazz Fest.

Prejean’s is not the only gumbo at Jazz Fest. There is also a lovely shrimp, sausage, and okra gumbo, from Fireman Mike’s Kitchen. Mike Gowland is a real retired fire fighter 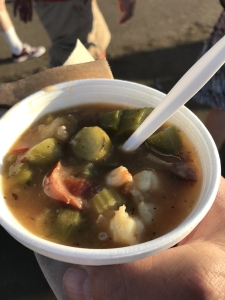 who has been at Jazz Fest for years and recently opened a restaurant. His gumbo is much lighter in color than Prejean’s and it is hard to miss the okra floating around in it, which adds some texture to the dish. There is also Creole filé gumbo, from Wayne Baquet’s Li’l Dizzy’s Café, the current outpost of a family with a storied restaurant history in New Orleans. They serve Creole food at their restaurants and their seafood-heavy gumbo is representative of that style (alas, I do not have a photo of Baquet’s gumbo).

If you set all three of the gumbos available at Jazz Fest side by side, you might find it hard to believe that they are all variations of one dish. There are a lot of great gumbos in local restaurants and, of course, many home cooks make their own. If there is not one right way to make gumbo, there are nevertheless a lot of people willing to argue about the dish itself. On gumbo’s origins, for instance: claims about the invention of the dish invoke, variously, African,

Native American, and European origins. The word “gumbo” derives from the Bantu term for okra. Some point to Choctaw soups and to the Native American introduction of ground sassafras leaves to Europeans, which is the source of the filé powder often used to thicken gumbos (and there are often filé making demonstrations at Jazz Fest). The Choctaw word for sassafras is, in fact, “kombo.” Some have argued that the soup has its origins in local variants on French bouillabaisse. We might add that the rice usually served with gumbo is a major south Louisiana crop that was originally brought to the Americas by Africans. These arguments about origins are part of a broader tendency in local popular literature to want to attribute different recipes or parts of recipes to specific ethnic groups, usually relying on broad generalizations about how and what people of various origins cook (“the French” brought roux, “the Spanish” brought ham, “the Africans” brought okra and rice, “the Germans” brought sausage, and so forth) and contributing to deeper debates about who can represent local culture. Some of the people in these stories were probably less eager to participate in the making of that culture than others, a fact that contributes to these ongoing debates.

The controversies do not end with debates about origins. Brett Anderson, a James Beard award winning local food writer, recently wrote an article in the New York Times focusing on a ‘new wave’  of gumbos available in New Orleans restaurants. The article featured the headline: “Gumbo, the Classic New Orleans Dish, Is Dead. Long Live Gumbo,” and discussed everything from a curried gumbo at Saffron NOLA to a seafood gumbo with flavors that point to Vietnamese and Chinese foods at Maypop, along with many others. The article—especially the headline—drove locals into a social media frenzy. Many erroneously assumed that Anderson was claiming gumbo was dead and indignantly denounced the New York Times for once again completely misunderstanding the city’s culture and traditions. It probably would not matter much what Anderson wrote. Fiercely defending and preserving the city’s and region’s cultural traditions—the “heritage” in the Jazz and Heritage Festival—is a mission that many locals take seriously. Outside authorities, or even local authorities working for outside media, raise questions at their own risk.

There have been other controversies in recent years around gumbo, including outrage over a recipe for gumbo promoted by Disney on social media. There have also been fights over what constitutes a proper roux, the addition of hard-boiled eggs to gumbo, and the use of potato salad in gumbo. This is a lot to take on board when you taste that cup of dark gumbo at Jazz Fest. If nothing else, the ongoing controversies about the origins, making, and representations of gumbo indicate that people care enough to keep the traditions alive. The variations and innovations in gumbo-making suggest that New Orleans is still a Creole city, constantly adapting to new ideas and innovations. At this year’s Jazz Fest (there is still one weekend left, as I write this), there will be an entire day of cooking demonstrations devoted to different kinds of gumbo. Tempting.