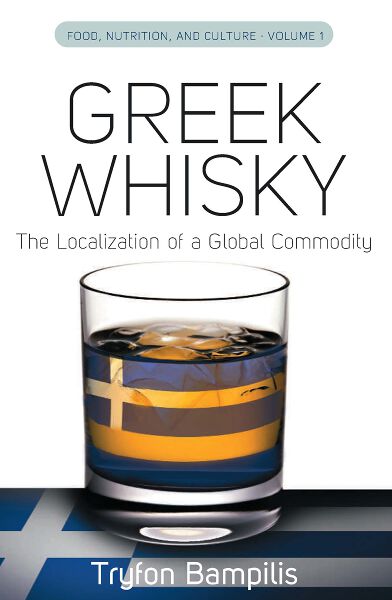 The Greeks do not make whisky, but they surely drink a lot of it. Why they do and how that came to be is the subject of Tryfon Bampilis’ wonderful book. Greeks, Bampilis contends, have come to associate whisky with things “modern.” Whether it be in Athens or Skyros, an island in the Northern Aegean, whether it be in a modern restaurant or a traditional gathering place, Greeks are showing their connection to a larger world of sophistication. They arrived at this point as they became more oriented towards Western countries, especially after World War II, and also because well-crafted advertising and merchandizing helped this change.

Bampilis first sets his discussion by placing Greek whisky consumption in the larger issue of modernization and commoditization. It is an excellent discussion, and I would recommend it to people unfamiliar with this literature. Bampilis places whisky alongside other items in Greece as a growing marker of how, where, and when a person chooses to establish both a statement and a preference for this drink. He sees drinking whisky as a statement of a stylistic identity, of a person saying: “This is who I am.” Moreover, this identity is established, often regardless of the individual’s ability to maintain a lifestyle that the identity of drinking whisky entails. In other words, many people spend more on whisky than their incomes can support. (p. 18, et seq.)

How did the Greeks get to this place? Largely till the period before WWI, Bampilis argues, Greeks drank “traditional” spirits, such as ouzo–a licorice liquor, and they drank them in traditional settings, such as neighborhood bars and music venues. If the drinking was outside the home, it was mostly men who drank in these settings. Men generally drank the harder liquors. When women drank, they sipped sweeter liquors, and they did so at home.

Yet many Greeks also had an historical and spiritual connection with England, dating, in part from the early nineteenth century War of Independence and England’s help in it.   Things English began to be considered as modern and sophisticated. That included whisky. As the drinking of whisky became more widespread, Greek advertising featured English text in addition to Greek text in its promotion of whisky (see, for example, p. 41.)

Bampilis sees the popularization of this drink arising in many ways, adding to the richness of this book. The ways included movies, music, the increasing inclusion of Greece into the Common Market. Movies featured sophisticated men and women dressed in Western clothes, sitting in bars, drinking whisky. Bampilis reviews the history of the Greek movie industry to show precisely this association of whisky and modernism. He ties it to the history of Greek contemporary music as well, and he situates each kind of music in different settings where whisky is consumed. This discussion is fascinating in and of itself, for it features the ways in which media can and do change tastes–and styles.

Furthermore, he places all of this discussion within the larger history of the last several centuries. After the Second World War and the Greek Civil War, the conclusion of which saw Greece remaining within the Western sphere of influence, more Greeks identified themselves as part of the West. Greece became part of the larger European trading block and large corporations edged out smaller distributers of Western spirits. As the subtitle of the book suggests, many distributors targeted not just the modernization aspirations of more affluent and urban Greeks, they also featured local ways of appealing to these markets.

One intriguing discussion is the way in which the drinking of whisky brought together two contradictory styles and traditions. After the First World War, most Greeks living in Turkey were forced to move to Greece in the “Population Exchange” following the defeat of the Greek Army in Asia Minor in 1922. These Greeks played different types of music from what had existed in the country before. Initially, many Greeks saw these ‘musics’ as ‘tainted,’ affected by Turkish music and not suitable for people exploring their own traditions. Over time, however, these different styles of music came to be played not just in lower-class venues but eventually in nightclubs where Greeks came to display their taste for sophistication. Images of this were featured in ads and movies were set in these venues (p.112, et seq.) Bampilis’ discussions of Greek movies and music are delightful and informative, especially to people not familiar with Greek history and culture.

Bampilis then delineates how gender roles, stylistic presentations, and rituals accompanied these transformations in drinking and changed over time. He goes into substantive detail first about the drinking life in Athens. Bampilis, who claims he is Athenian on one side of his family, and Skyrian on the other side, used his family and school contacts to investigate Athens and Skyros for his informants and for their locales.

The picture he paints of the role of whisky and other drinks in the drinking life of Athens is complex and nuanced. In Athens, those men who drink whisky do so to signify modernism and masculinity Moreover, these men compete in several areas–spending money on the liquor itself, on how much liquor they can consume without appearing out of control, (p.141,) and of spending money on associated rituals, such as throwing flowers onto the stage for the performer (p.142.) The flower ritual, in recent times, replaced an earlier ritual of breaking bottles. Women who consider themselves modern also consume whisky, often as their sole drink (p.135.) As a general rule, single malt whiskies are the drink of choice. In addition, little food, except for nuts and similar edibles, is consumed when drinking whisky.

Bampilis paints a different role of why whisky and other alcoholic drinks are consumed on Skyros, his other research site. He presents a detailed portrait of an island from an historical and ethnographic perspective, giving both the specialist and non-specialist a rich view of the social life of the island. Despite its small population of less than three thousand, there are many public and private venues for liquor consumption, including whisky. The choice of liquors to drink and where to drink them is another debate between modernism and traditionalism (p.177.) For the most part, traditional Greek liquors are drunk in the home and for certain occasions. Women drink ” …a sweet liqueur, which is homemade and is considered a female drink…(p.173.)” Alcohol consumed in the home is accompanied by different kinds of foods. Meze on Skyros is usually local cheese, olives, and bread and is “…consumed outside the home…(pp.174-5.)” It is symbolically opposed to “real food” which is “…made in the household by the housewife (p.175.)” The household is the domain of the “feminine (p.175.)”

The above examples are just a small picture of Skyros’ social life and the role of alcoholic beverages in it. Bampilis covers older families, people who have spent time in Athens, shepherds, laborers, single men, single women, married women with children, married women without children, and prostitutes. Each group has its own choices of drinks, how much one can drink, what to eat with which drink, and what music to listen to when doing all the above. As Bampilis notes, “The modernism of whisky on Skyros Island in the North Aegean is associated with an imagined Athenian style, which opposes the values of shepherhood [sic] and domesticity and is widely shared by the laborers of the island pp.210-11.)”

Moreover, gambling is one of the ways men engage in competition and reciprocal exchange in Skyros (and, as Bampilis notes, other North Aegean islands (p.189 et seq.) Like drinking whisky and other beverages, men play different card games in different venues, with different kinds of interactions, including how to deal with the people who lose at cards. It is also a way for laborers “…to make their style with ksodema (spending) and identify with the popular culture of Athens (p.197.)” Bampilis concludes his analysis of the role of whisky in Skyros society thusly: ” [whisky consumption} is for those who want to break apart from the matrifocal rules and extended matrifocal kinship obligations (p.213.)”

Greek Whisky is of importance for those anthropologists studying the ways food and other products become both globalized and localized in neo-liberal economies and societies. It is of further importance because of the ways in which Bampilis portrays how politics and media create reinforce these lifestyle changes, how they become genderized, how they express styles of identity, and how they relate to social life, including different kinds of food, movies and music. It is also useful for students of economics and business, and it is appropriate for upper division undergraduates. And it is a delight for the general reader. One suggestion for future editions of this book is that, given the large number of Greek words, a glossary be provided in addition to the Index.