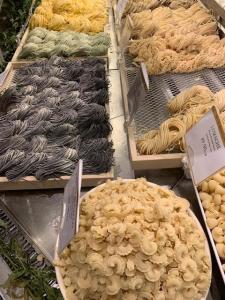 One of the wonderful consequences of stepping out of the office and classroom and going into the “field,” are those moments where participating in a singular experience creates a flash of insight, lighting up new neural pathways (or maybe generating alternative visions), an opening that allows you to ‘connect the dots’ in a new manner. All of a sudden a series of seemingly random moments or thoughts start to make sense in relationship to each other. This happened to me in March, during an extended trip in Italy. I went on a fieldtrip with food anthropologist Elisa Ascioneand her Umbra Institute students to visit Parmigiano-Reggianocheesemakers and members of the Parma Prosciuttoconsortium as well as a visit to FICO Eataly(outside of Bologna). Each of the stops on the fieldtrip was stimulating and facilitated many new thoughts about the taste of place, Italian food culture and the globalization of the food system. But the moment where I was jolted out of my familiar thoughts about such topics, the moment I realized something was happening right in front of me and I was not paying attention, was when we stepped into the vast building that is FICO Eataly World. This vast indoor and outdoor space (100,000 square meters) opened in late 2017 and promised visitors “a discovery of all the wonders of Italian biodiversity”. I had heard about Eataly from friends and family in New York City and last year I went on a quick walk through of the one in Boston. Without reflection or connection, my analysis was simple: this was a new version of the standard American food court (Eataly operations in the United States also include Las VegasandChicagoand the global total is 39). End of story.

But then I went to Italy for six weeks. And I spent much of that time exploring Italian food culture, talking to Italians invested in making food and drink or scholars interested in understanding such practices. Entering the former warehouse, now housing the “Disneyworld of food,”  the story of Eataly immediately became more complex and compelling. I had no previous expectations, as I didn’t know this theme park existed before we started the fieldtrip; on entering I tried to take in the wide lanes extending between many shops – the stand creating homemade pasta, the endless trattorias (45 total), the Grana Padano cheese plant, the stand making Mortadella – the list goes on and on. But there was more than the seemingly infinite offerings of food and drink. There was the amphitheater for presentations and classes! The free bicycles (with built in shopping baskets)! The outdoor miniature golf course themed with statues of farm animals! A volleyball court! The juxtaposition of talking with the cheesemaker in the Parmigiano-Reggiano plant, watching the shaping and aging of huge rounds of cheese earlier in the day, tasting the particularities of one cheese made in one place, and then wandering around this massive enterprise, gave me pause (and a little bit of a headache too!). I realized that a powerful vision and a massive infrastructure were crucial to the reality of Eataly, an enterprise only twelve years old, telling a very 21stcentury taleabout the allure of food and drink, evoking tropes about culture and heritage while existing in tension with the reality of global supply chains. 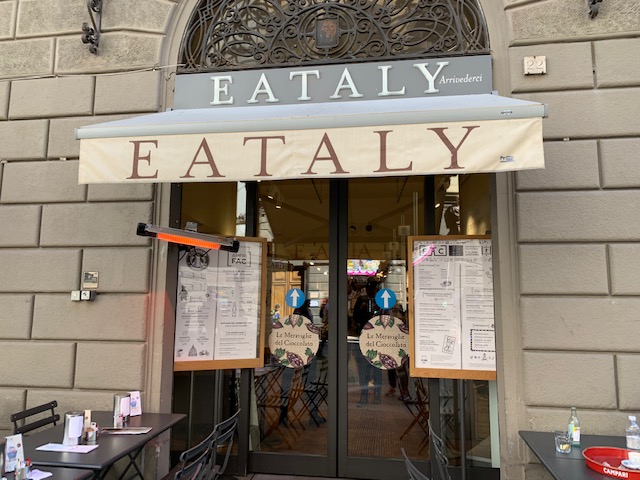 This story was about way more than a food court. But how to figure it out? In particular, what are the long-term consequences of the success of Eataly, especially for the livelihoods of Italian producers and the transfer of knowledge around Italian food culture. In a recent New York Times article (about the opening of the 39thEataly, in Paris), Nicola Farinetti, the store’s manager and son of the chain’s founder, explained Eataly’s role: “Unfortunately the world of small food shops, those small places dedicated to quality food, like Americans imagine, died many years ago.” Eataly, in this analysis, serves as – well, what? – a museum and mall? A 21stcentury town center? But my knowledge of Italian food culture is certainly not thick, so I decided to reach out to the experts! I contacted five scholars of Italian food culture, including anthropologists.

Rachel Blackemphasizes the differences in meaning and thus consequences, especially for everyday life. “I think you need to differentiate between Eataly in Italy and abroad. The first Eataly in Turin really spoke to Italians (Torinesi). There were many ‘idioms’ from open-air markets and regional food specialties and wines were showcased. [Whereas] Eataly inNYC and Boston tend to be more of a food court with some specialty items here and there. I find it to be a very superficial showcase of Italian food.”

Fabio Paresecoli agrees, pointing out that there are other robust means for Italian producers to reach consumers, especially Italian consumers: “Italian food culture as a live, changing, evolving dimension definitely does not need FICO Eataly or similar enterprises to remain viable. Already the government has provided a strong framework for the maintenance of heritage through geographical indication and the inscriptions on the UNESCO intangible cultural heritage list, a project that has also been embraced by producers as a way to boost their sales, command higher prices, and distinguish themselves from Italian-sounding products.”

Rebecca Feinberg generally agrees with these characterizations, but cautions: “I think Italian food culture will keep growing and changing, as it always has, and that commercializing it as a Disneyland will be a financial boost for a small cohort of producers (among the thousands who are not selected for Eataly’s shelves), but also part of the larger …trend to [a certain] museumification of food culture that producers already wrestle with when it comes to complying with DOC standards and consortia [demands].”

Everyone agrees that the increasing global reach of Eataly stores and the opening of FICO Eataly shifts the paradigm; what might have been the original vision with the store in Turin and a few other Italian cities has transformed. Feinberg says, “Ultimately Eataly is not for Italians–it is mainly for tourists to Italy and a way to step into an Italian food wonderland for a few minutes or hours elsewhere in the world. Eataly sells shelf-stable goods and restaurant meals, neither of which, to me, capture ‘Italian food culture’– that happens in the kitchen, at the table, at the outdoor market, in the vineyards or dairies, etc. And Eataly cannot package that…. [in this sense] Eataly is more about Italian food commerce than Italian food culture.”

Jesse Dart concurs, “I think Eataly is just the first to be able to capitalize on Italian food culture in a way that is profitable and in a format that is exportable. I personally think that FICO is a risky venture that seems most interesting for urban Italians (and some tourists).  Eataly is still an expensive store for regular shopping. Italian supermarkets, especially ones such as COOP, also sell locally sourced/specific products that are of similar or equal quality to many of those at Eataly.”

Paresecoli is of similar mind, “I think the concept of the relevance of origin, tradition, artisanality is well established among Italian consumers now. Even those who cannot afford the upscale stuff, they can have access to the supermarket avatar. I think Eataly/FICO are more for foreigners.”

The general consensus is that Eataly is a very successful Italian company capitalizing on the global allure of Italian food culture, but, for the moment, not a significant threat to the everyday habits of Italians. In Black’s opinion, “The real deal is breaking bread with people at someone’s home. It’s more than eating food–it’s conversations and the intimacy of the table, as well as the cooking and the food. Italian food culture is changing (like all food cultures) but as long as Italians keep eating together, it will stay vibrant.”

Eataly poses some possible perils for producers who want to engage with an increasingly large, bureaucratic and powerful company. Paresecoli points out, “There has been a lot of debate about the pressure Eataly is able to put on producers. On one hand, they ensure sales, but at the same time they have a huge bargaining power. Also, I suspect that some producers are so small that all their production goes to Eataly, so the visibility they get there does not help them expanding their business, unless they invest and scale up.” Feinberg echoes these sentiments: “Eataly will, I think, offer some producers an incredible infrastructure to accessing a global market, and probably take care of a lot of the export paperwork, relationship building, and bureaucratic labyrinths that impede producers from doing this on their own. Some producers, inevitably, will transform their business and practices in the effort to scale up and standardize, while others may struggle with inconsistency in ordering or short contracts.”

These realities generate other questions. Dart brings in the local/global tensions inherent in the Eataly enterprise: “I’m skeptical now that some of the smaller producers are able to meet the quantity demands that a company like Eataly might have. Maybe a better question is does America/Brazil/Russia/France/Japan need a Florentine version of Nutella or Easter cakes? Eataly in New York is full of contradictions too, like the Nutella Bar. It’s far from an artisan product but has a prominent place in Eataly in NYC.” However, there are novel opportunities that arise; Parasecoli provides this example: “At the same time, Eataly is helping new product categories to become visible. A good example is IGAs (Italian Grape Ales), which are hard to find anywhere else.”

My takeaway? Food anthropologists and food studies scholars need to pay attention to Eataly! And perhaps our work should be collaborative, global and iterative; we need to mimic it.

Elisa Ascione responded to my questions with her own mini-essay, one that considers the importance of Eataly’s founder, Oscar Farinetti, the role of Slow Food to Eataly’s vision and organization, while also incorporating the analyses of Italian scholars. Her thoughts, combined with others on possible future research questions, can be found in Part Two (to be posted next week).