Fermentation is a preservation technology often seen in Southeast Asia and East Asia, including fish sauce and fermented fish. However, naresaba (fermented sushi made with mackerel, also called saba-narezushi) made among households in Tagarasu, my field site in Fukui prefecture, Japan, has one significant difference. While most communities use salted fish for crafting fermented fish, my informants use mackerel that have ‘already’ been fermented (not just salted) as the base of naresaba making. This fermented seafood, however, is now becoming an endangered culinary heritage.

Tagarasu is a coastal community with a population of approximately 400, located in Wakasa Bay, Obama City of Fukushima prefecture, Japan

Tagarasu is one of the first places where an advanced purse seine net or kinchaku’ami operation began in Japan in 1909. Commercial purse seine mackerel fishing in Tagarasu was community-based. Over 90 percent of households in Tagarasu were stockholders of their cooperative purse seine fishery, sharing its profit as well as costs for over 80 years. However, inefficient fishing management led to the depletion of mackerel resources, resulting in the closure of the Tagarasu purse seine fishery in 1987.

Fermentation is an adaptive strategy to make the use of over-harvested fish, especially pelagic fish species whose uncertain migratory route and timing often offer unexpectedly successful catches for coastal communities. When cooperative purse seine members had a successful fishing season, they received dozens of surplus mackerel with the allocated share fund.

The name of municipality where Tagarasu is situated is the same as the name of the president of the United States. Here, a man in classical traveling outfit, wall-painted at a fish market near Obama city fishing port, holding a pack of heshiko mackerel.

A few Tagarasu elders also bring in their seafood products to farming communities. Their parents and ancestors used to barter their seafood for rice and vegetables. Rice received from farmers in fall was used for home consumption but also for naresaba production, and farmers received naresaba in return in early winter. The historical routes for transporting seafood from Wakasa Bay to Kyoto still function as a form of human relations, even long after both Tagarasu and farming communities could purchase food commodities in the supermarkets.

The making of naresaba requires two fermentation processes. They cover and store fat-rich seasonal mackerel with rice-bran between October and March. Mackerel preserved with rice bran spends a hot summer in a barrel for aging and condensing umami flavor. This is how to make heshiko. After about a year of aging heshiko mackerel, Tagarasu people clean them by taking off the salt and thin skins from heshiko mackerel in winter. Those desalted mackerel are then coated with vinegar and stored again for the second process of fermentation, this time for about two weeks with rice and kouji malted rice. 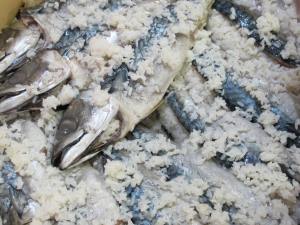 Preserved mackerel (heshiko) are cleaned and now ready to be for the second fermenting process, with rice, vinegar, and kouji.

Naresaba looks and tastes different from the sushi that most readers are familiar with (a slice of fish over a bite-size rice, or a sushi roll). Simply put, it is not fresh but aged with fermentation. Two-step fermentation removes the fishy smell from the final product while enriching umami flavors. Each household develops its own home recipe and different taste in the degree of creaminess and sourness of stuffed rice and the texture of fermented mackerel. This culinary practice is unique enough for Slow Food Foundation to list it in the Ark of Taste in 2006.

However, being listed on the Ark of Taste means that naresaba is heritage seafood at risk of disappearance. While local production, distribution and consumption of naresaba are still important aspects of regional cultural identity, local mackerel and salt are no longer produced enough for the naresaba production. Instead, Tagarasu people use mackerel caught in the other parts of Japan and imported mackerel, especially from Norway. Commercially they are sold under the same name, masaba (literally ma means real, and saba means mackerel), though the origin of products is labeled respectively by regulation. But, they are different subspecies. The Norwegian fish are Atlantic mackerel (Scomber scombrus) while the Japanese fish are Pacific mackerel (S. japonicaus).

Some of the local minshuku (inn) in Tagarasu serve homemade naresaba upon request.

However, Norwegian mackerel are too fatty for making naresaba. The high fat content of Norwegian mackerel turn the color of final naresaba products into slight yellowish color, while naresaba made with domestic mackerel turns both fermented fish and covering rice white. The color of food is significant as whiteness symbolizes purity and thus makes naresaba ritual food, shared by family and distributed to relatives and old trading partners in farming communities in the end and beginning of the year. Grilled Norwegian mackerel may be popular at izakaya (Japanese style gastropub) and sold as a ready-to-serve item in the supermarkets. But, they cannot be simply substituted with locally produced mackerel for the maintenance of cultural meanings and social relations that heritage seafood has held for centuries.

Prepping mackerel for heshiko-making in spring.

It is also becoming difficult to pass down the culinary knowledge and technique of naresaba making to future generations. As the local seafood industry declined with the end of purse seine fishing, young people moved to urban areas, reducing the local population. Elders told me that the trading relations they have kept with farmers could also come to an end unless children learn how to make naresaba and decide to continue the intergenerational food exchange.

Seafood, especially blue fish like mackerel and sardines, is now a global commodity and fetishized as a healthy food. Globalization makes fat-rich Atlantic mackerel available to consumers anywhere in Japan. However, it cannot reverse the social and environmental impact of purse seine fishing and maintain the biocultural diversity that shapes and is shaped by the coastal foodscape in Japan.

Shingo Hamada is a lecturer in the food studies program at Osaka Shoin Women’s University in Osaka, Japan, and also a research associate in the department of anthropology at Indiana University. You can read more about Dr. Hamada and his work here.