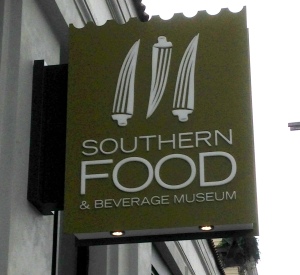 Do you live somewhere with a cuisine of its own? How would you know? There have been some famous attempts to define cuisine, including one by Sidney Mintz that has generated a great deal of debate. I am going to go out on a limb here and suggest that a cuisine requires some kind of self conscious effort by people within a community to declare that their food should be thought of as a cuisine. Who gets to make that claim, what makes the claim legitimate, whether or not it might be disputed…I recognize that there are many questions that could be raised about this definition. But at least for my current purpose, the definition will work because it allows me to suggest that those of us who live in the American South have a cuisine. How do we know?

We have a museum dedicated to proving it.

The Southern Food and Beverage Museum is an actual free-standing cultural institution devoted to documenting the foodways of the American South. I have visited some fascinating, fun, and sometimes odd exhibits and museums devoted to food over the years. These include the Maison Cailler Chocolate Factory in Switzerland (and Hershey, PA as a kid), a mustard museum in Dijon, a beer museum in Prague, a flour museum in Minneapolis, many brewery and winery tours, visits to cheese makers (Roquefort Société puts on a good show), and of course the Coca Cola museum. Fascinating and entertaining as these can be, most are really advertisements for a particular company and its products, often with an excellent opportunity for sampling at the end of the tour. The Mill City museum is an exception. Run by the Minnesota Historical Society, it is built in the ruins of a flour mill on the banks of the Mississippi and really does make an effort to put the history of flour into a social context. But it, like nearly all the others, is still devoted to only one product. This is not where you go to learn about the food of a region or country.

As an effort to document and display the foods and foodways of the American South, SoFAB (yes, that is the acronym) joins a surprisingly robust range of other institutions around the region devoted to similar objectives. The Southern Foodways Alliance, which is part of the University of Mississippi’s Center for the Study of Southern Culture, for example, or food studies as part of a larger program in American Studies at the University of North Carolina, contribute to the idea of distinctively southern culture and foodways.

SoFAB started out as the vision of one woman, Elizabeth Williams, who began work on the idea well over a decade ago. Starting in improvised spaces, she recruited people to build exhibits, participate in conferences, and organize events over the years, eventually landing a space in the Riverwalk shopping mall in New Orleans. I should probably reveal at this point that I am one of the people she recruited and am thus no impartial observer, having enthusiastically participated in a wide range of events at the museum. Liz has worked hard to build an institution that has ties to an immense network of people involved in food studies (including scholars from all over the world), but also to people in the food industry and activists of all sorts.

The museum has a new home, where it may become even more of a cultural juggernaut in the South and beyond. Last week I attended the ribbon cutting ceremony for the new museum, which is now housed in a substantially renovated former market building in a neighborhood of New Orleans that is, as we say, “coming back.” The new site is quite a bit larger and will house permanent and temporary exhibits, a restaurant devoted to the region’s foods, the Museum of the American Cocktail (yes, that has been part of SoFAB all along), and an ongoing series of lectures, cooking demonstrations, conferences, and other events. SoFAB is also home to a substantial research library that is already a very useful resource for scholars interested in the study of food.

The new museum is a big deal here in New Orleans. The ribbon cutting was standing room only, with a surprisingly large media scrum and celebrities from all parts of New Orleans life in attendance. These included chefs and restaurateurs, musicians, scholars, neighborhood activists, and a large number of elected officials (or their representatives) from the state and the city. The museum’s new location contributes to the renovation of a neighborhood that has seen better days and is part of other development in the area, including the future home of the New Orleans Jazz Market (a performance space organized by musician and cultural activist Irvin Mayfield) and other restaurants (including Café Reconcile, a restaurant and institute devoted to training “at risk” young people for the restaurant industry). All of this is part of the ongoing effort to develop New Orleans “cultural economy” by the city and state, turning culture into an economic asset.

Which leads me back to the original question: how would you know if you have a cuisine? I don’t think having good or interesting food is enough. All food is interesting, at least for anthropologists. Not only that, but every society has its own foodways. To make those foodways a cuisine, people need to be interested and passionate about it. They have to be self-conscious about it. Above all, they must want to call it a cuisine. Here, in the American South and, especially, in New Orleans. we have all that. We have a museum to prove it.