Review: A Foodie’s Guide to Capitalism

A Foodie’s Guide to Capitalism: Understanding the Political Economy of What We Eat, Eric Holt-Giménez, Monthly Review Press, 2017. 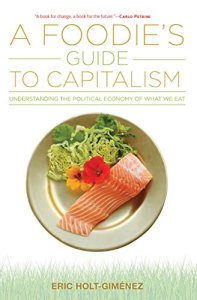 Working in food studies often means grappling with inequity (and deciding where best to focus our own energies in light of inequity). Yet food systems exist on so many different scales, and connections to health, well-being, and nourishment seem infinite. In the face of this complexity, we become specialists in specific parts of the food system, and can easily lose sight of the broader context. A Foodie’s Guide to Capitalism offers a key contextual primer for food researchers and activists. The book provides much-needed context for understanding of the consequences of treating food as a commodity. As such, it provides important tools for good, deep thinking on food systems. Here, the cliché “think global, act local” seems resonant: we become specialists in a particular space and a particular food niche, yet require understanding of broader trends (including capitalism) to work more effectively and avoid triggering a cascade of unintended consequences.

An overview of the book, in quotes (Loc refers to Kindle version)

Understandably, they [those working on food] concentrate their efforts on one or two issues rather than the system as a whole, such as healthy food access, urban agriculture, organic farming, community-supported agriculture, local food, farmworkers’ rights, animal welfare, pesticide contamination, seed sovereignty, GMO labelling…the list is long. (Loc 129 of 5123)

Critical knowledge of capitalism—vital to the struggles of social movements through the nineteenth and twentieth centuries—largely disappeared from the lexicon of social change, precisely at a time when neoliberal capitalism was destroying the working class and relentlessly penetrating every aspect of nature and society on the planet. (Loc 172 of 5123)

Chapter 1: How Our Capitalist Food System Came to Be

By the end of the nineteenth century, mercantilism, colonialism, and industrialization had all combined a new form of global capitalism that spread powerfully, if unevenly, around the earth. … The flow of cheap raw materials from the colonies to the centers of imperial power transformed livelihoods, territories, and systems of governance as food, land, and labor became global commodities. (Loc 433)

Ever since peasants were pushed off the land and made dependent on wages, agricultural labor has been paid far less than its social value (what it costs to reproduce a farmworker’s capacity to work) much less what it adds to the price (exchange value) of food products. Today agriculture and food processing in the United States and Western Europe largely depend on undocumented labor. (Loc 963 of 5123)

Unless we change the underlying value relations of our food system—the contradiction between food as essential for human life and food as a commodity—we will be working on the margins of a system that is structurally designed for profit rather than need, speculation rather than equity, and extraction rather than resilience. This doesn’t mean that the many social innovations challenging the inequities and externalities of the corporate food regime around the world are not worth implementing. On the contrary, our food system needs innovation. But for these hopeful alternatives to have a chance of becoming the norm rather than the alternative within a food system that is structurally favourable to large-scale industrial agriculture, we will need to know what structural parts of the system need changing. (Loc 1044 of 5123)

Though we are not likely to lose the commodity form of products any time soon, we can work to change the relation between use and exchange values, and we can change the terms of socially necessary labor time (and working conditions) to make a more sustainable and equitable food system that reduces the exploitation of workers and does not pass off onto society the social costs (the externalities) that the producers ought to bear. (Loc 1065 of 5123).

The logic of capital—rather than the logic of fairness, compassion, ecology, conservation, or health—governs our food. Our attempts to transform the food system hinge on changing the social relation embedded in our food. Because food is both a commodity and an existential necessity, and because our food system impacts all other aspects of our social and economic system because we all eat, the social relation of food is pivotal in terms of human well-being. The firms controlling our food system understand this perfectly, exploiting the public use value of food to extract exchange values for corporate profit. Substantive changes to the food system will affect the entire economic system. Perhaps this is precisely what we need. (Loc 1103 of 5123)

Her (Elinor Ostrom’s) fieldwork with traditional societies convinced her that natural resources held in common could be sustainably managed without regulation from government. She also believed that collective action and reciprocity were critical components to human survival and for solving social dilemmas in which individual short-term self-interest undermines the greater good. (Loc 1371 of 5123)

Peasants and smallholders still feed most people in the world, though they cultivate less than a quarter of the arable land. (Loc 1801 of 5123)

Subsidies are often criticized by some environmental groups, which claim that they drive overproduction of cheap food and are given primarily to large farmers. The reality is that low prices drive overproduction, which results in subsidies. Eliminating subsidies (without other major structural changes to supply and price) would likely drive small and midsize farmers out of business, thus contributing to further farm consolidation into larger and larger farms. (Loc 1819 of 5123)

Only power that springs from the weakness of the oppressed with be sufficiently strong to free both. Any attempt to “soften” the power of the oppressor in deference to the weakness of the oppressed almost always manifests itself in the form of false generosity; indeed the attempt never goes beyond this…. An unjust social order is the permanent fount of this “generosity,” which is nourished by death, despair, and poverty. That is why the dispensers of false generosity become desperate at the slightest threat to its source. (quoting Paulo Freire’s Pedagogy of the Oppressed, Loc 2628 of 5123)

Industrial agriculture has taken the farmworker’s voice away, so we don’t hear them identifying as people of the earth. We have been identified as machines, as beasts of burden. It’s convenient for people to identify us that way because then it’s easy to exploit us. But if you’re talking about a human being who can express herself or himself as a person of the earth, with this intellect and wisdom about the right way to grow food, then it’s not as easy to exploit. A lot of the family farmers and growers know that the way they’re growing food and treating the earth is wrong. (Loc 2447 of 5123):

We should all feel sorry for ourselves for losing one of our most precious institutions, the family farm.” Farm depressions do not reverse farm consolidation; the land will continue to be farmed, but by some other farmer who pursues the inevitable (Loc 3204 of 5123)

We can use a lot more produce raised locally, but to think that a corn and soybean farmer could convert their land to fruits and vegetables is unrealistic. Midwestern farmers plant corn and soybeans fencerow-to-fencerow because there are really no alternatives in the capitalist commodity system. (Loc 3225 of 5123)

The challenge for our planet is not how to (over) produce food, but how to keep smallholders on the land while sustainably producing healthy food. The challenge is not to attempt to engineer “climate-smart” commodities for nutritionally fortified crops, but to build overall nutrition and resilience into the whole agroecosystem. This will take more—not fewer—highly skilled farmers. (Loc 3345 of 5123)

The challenge of building a public sphere for the twenty first century is not to re-create the past, but to build a new, transnational public sphere that has a critical analysis of capitalism, builds social legitimacy for movements for food justice and food sovereignty, and connects them with the broad environmental and social justice movements. It is not enough to build an apolitical public space in our food system. Creating alternative markets is not the same as shutting down capitalist markets. Both actions are needed for regime transformation. We need a movement that is able to forge a militantly democratic food system in favour of the poor and oppressed globally and locally, and that effectively rolls back the elite, neoliberal food regime. (Loc 3649 of 5123)

We also need to ask, who will transform the food regime, how will it be transformed, and in whose interests, and to what purpose? (Loc 3658 of 5123)

Understanding why, where, and how oppression manifests itself in the food system, recognizing it within our food movement and our organizations (and within ourselves), is not extra work for transforming our food system. It is the work. (Loc 3662 of 5123)

While not intended for an academic audience, this book provides a plain language, big picture understanding of the food system, and would be very well-suited to an undergraduate class. The book is U.S. centric, yet resonates and is applicable to a global audience.