Since 2008, I have been studying the relationship between intergroup interaction and agricultural production on the Western slopes of the Peruvian Andes. One of the areas that my research highlights is the way in which food was key to political maneuvering that took place during this time period.  The search for food was one of the driving forces behind pre-contact Andean geo-political maneuvering, particularly during the Late Intermediate Period (1100-1472 CE).  The steepness of the Andean slopes creates stacked microclimates and each of these microclimates is suited to growing a different suite of crops.  As such, Andean farmers had to maintain fields at various different elevations in order to add variety to their diets as well as to mitigate the risk of crop failure (see Murra 2002 for a complete explanation of this system).  This movement up and down the Andean slopes in search of agricultural space led to a great deal of interaction between different cultural groups in different regions and the outcomes of these interactions sometimes often wide reaching impacts on regional geo-politics (c.f. Dillehay 1979; Rostworowski 1973; 1988).

My research takes place in the Huanangue Valley, which runs through an ecotone known locally as the chaupiyunga.

The chaupiyunga serves as the cultural and ecological boundary between the coast and the highlands.  My data shows that the Huanangue Valley was the setting for intense sets of interaction between the coastal Chancay, highland Atavillos and local chaupiyungino  groups, all of whom wanted access to the very limited, but very rich, agricultural lands which were ideal for growing highly valued crops such as  maize, coca, chili peppers and fruit.  In contrast to other regions of the Andes, where coastal and highland groups tended to come into violent conflict with each other over access to agricultural land, the different groups in the Huanangue Valley seem to coexist peacefully with each other.

Based on preliminary excavation data, I am beginning to understand why.  We know that the local chaupiyunginos controlled the uptakes for the irrigation canals which also allowed them to indirectly control agricultural production in the valley.  As such, when the Chancay moved into chaupiyungino territory from the coast, they would have had to find a way to convince the local people to give them access to water so that they could water their fields.  As the Huanangue Valley was relatively far away from the Chancay heartland, Chancay settlers did not have the support they needed in order to forcibly take the irrigation uptakes.  However, the Chancay did have access to highly valued coastal foods such as shellfish and peanuts.  During excavation, we found ample evidence of feasting at the Chancay site of Salitre.  My hypothesis is that the Chancay held feasts at Salitre and invited their local chaupiyungino neighbors to these feasts.  At these feasts chaupiyunginos were provided with shellfish, camelid meat and other delicacies as part of a strategy of alliance building, through which the Chancay hoped to ensure their access to water.  Thus, not only did the desire for food bring the Chancay into chaupiyungino territory, forcing the two groups to face each other, but the sharing of food helped alleviate tensions between the groups, allowing them to share water and land peacefully. 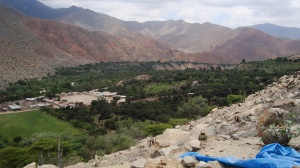 I am working to prove my hypothesis through analyzing soil samples taken from Chancay and chaupiyungino sites in order to better understand where crops were being grown and consumed.  More information about my efforts can be found at  https://www.microryza.com/projects/feasting-interaction-and-the-middle-ground-understanding-local-geopolitics-through-agricultural-production.

Rostworowski, María. 1988. Conflicts Over Coca Fields in XVIth-Century Perú. Memoirs of the Museum of Anthropology. no 21. University of Michigan, Ann Arbor.

Note from the editor: Readers will notice that the author of this post has provided a link to a Microryza web site. This is a crowdfunding web site for science research. It seems that at least some graduate students in anthropology are using this as a way to fund their research. SAFN welcomes blog postings from graduate students whose work is related to the anthropology of food and nutrition that follow this model. Such postings must, of course, follow our other guidelines (see the Blog Contributors page for more details) for contributions to the blog.