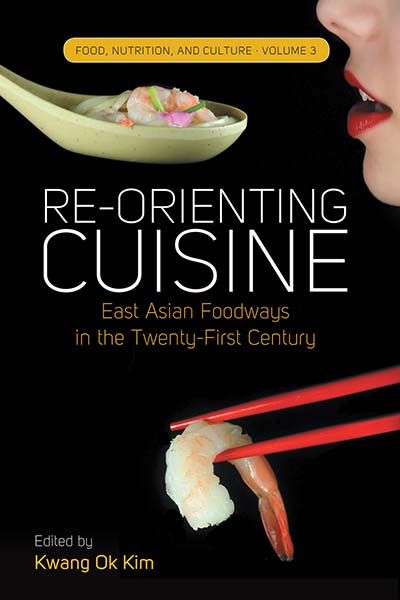 Kwang Ok   Kim has assembled a wonderful collection of studies about what had happened and what is happening in East Asian food.  These studies fall into three main categories: how national and local cuisines define what is traditional in a particular country’s food consumption; how food practices from elsewhere transcend national and cultural boundaries; and, lastly, how people see their own and the cuisine of others addressing well-being, health, and danger.  Moreover, Kim’s introduction and each of the studies situate their discussions in larger academic and global studies about modernism, authenticity, traditionalism, nostalgia, globalism, and food safety.  The studies are particularly germane to students of food, culture, tourism, and politics.

Section I, about national food changes, contains four essays.  The first, by Opkyo Moon, demonstrates how Koreans have created/re-created a royal cuisine from the period before the Japanese colonial control.  This cuisine, coupled with other period practices, is a way that Koreans have established a significant connection to a more illustrious past.  The second, by Hsin-Huang Michael Hsiao and Khay-Thiong Lim, contrasts Malaysian cuisine(s) and Taiwanese cuisine.  They suggest that Malaysia has decided to try to create a national cuisine, bringing together its different ethnic and culinary traditions.  The British, they argue, did not accept any significant foods as part of their occupation.  Taiwan, on the other hand, has “returned” to its pre-Nationalist Chinese occupation past by focusing on dishes from that earlier era.

Jean de Bernanrdi  outlines how tea culture was introduced in Wudang Province in China.  This introduction created a sense of tradition, authenticity, health consciousness, tourism, and international connections to vendors overseas.  Kwang Ok Kim shows how Koreans focused on and “re-invented” rice as central to their identity and their sense of health and well-being.  These practices have extended to Korean restaurants overseas.  In sum, these essays portray cuisine as a something real–something to be consumed and enjoyed, and as symbols of national identity.   Moreover, they also show societies using their cuisines to create and imagine pasts, futures, to portray “authenticity” and to offer food as commodities  to promote  health and tourism .

Section II, about food practices across nations and cultural boundaries, contains six essays.  The first, by Kyung-Hoo Han, traces the recent history of ramen in its many forms, from China to Japan and Korea.  Japanese ramen is much more of a “…fatty and nutritious” dish than earlier domestic soups (p.92) and is served in restaurants.  Korean ramyeon, on the other hand, tends to be an instant quick, fast food version of noodle soup, previously much saltier, and not eaten in restaurants for the most part. David Y. H. Wu follows the path of Japanese cuisine in Taiwan.  Taiwanese see eating Japanese food as a return to the time when the Japanese occupied Taiwan.  Japanese food is considered both comforting, and given Japan’s emergence as a modernizing power, a connection to the larger world of sophistication.,  Moreover, Japanese food has diversified in terms of incorporating Western elements, such as Japanese French pastry, so Taiwanese people can partake of global food trends.

The third essay, by Melissa L. Caldwell, portrays a Russia which has “domesticated” Korean food as part of the larger domestic cuisine. Russia has few Chinese restaurants, values them as particularly special, and also considers the relatively new Japanese food as special.  Moreover, she notes that Chinese restaurants, to compete, have started to offer selected Japanese foods.  The fourth essay, by Yuson Jung, portrays a Bulgaria which, following the collapse of Communism and its associated deprivations, wants to be modern and part of world culture.  To do so, it has integrated Chinese food, often standard dishes with occasional domestic offers such as bread, into its restaurant offerings.  The fifth essay, by Sangmee Bak, offers a picture of a South Korea which wants to eat “globally”.  That means diverse cuisines.  The one featured most is Indian cuisine, which, for the most part appeals to students and take-out clientele.  Following the themes in this volume, Bak notes that their Korean cuisine is being pre-empted by the Japanese, who offer “…Korean food to Westerners…thereby compromising the food’s Korean identity” (p.182.)

One personal note here: in a “reversal,” two of the Japanese restaurants where I live are owned and managed by Koreans. Furthermore, a local Thai restaurant shows the cross-cultural fertilization outside of Asia:  “traditional Thai noodles, curries, and soups are interspersed with surprises such as the Laotian Pork Sausage appetizer and British-inspired curry puffs (spiced potatoes and carrots wrapped in dough that is then fried” Voight (2018: 14 .)  As many of the essays have noted, overseas Asian communities experiment with many kinds of fusion dishes and mixing cuisines.  Often, overseas Asian influences work their way back into national cuisines, as noted above in the ways “Western Japanese” food is an alternative food in Taiwan.

The sixth essay in this section, by Michael Herzfeld, argues that Thai cuisine mirrors themes inside the culture:  It is complex, ambiguous, and often contradictory.  For example, higher and lower class people like very spicy/hot foods, and the ability to eat these foods is seen as a sign of masculinity (p.192 et seq.)

Section III, about well-being and safety, contains four essays.  In the first essay, Young-Kyun Yang portrays a South Korea increasingly concerned with well-being and taking care of one’s body.  Consequently, Chinese food, once favored, is seen as unhealthy because it is considered too greasy and contains too much MSG.  In the second essay, Sidney C.H. Cheung traces the evolution and dispersal of American crayfish in Asia, where each country and cuisine treat it differently, as for example, in China, where some producers make it into “lobster.”  In the third essay, Jakob A. Klein draws a picture of a Chinese population increasingly concerned with the cleanliness and purity of its food.  He notes that as elsewhere in the world, foods often seen as cleaner foods are more expensive and out of the reach of poorer people who both value it and cannot afford it (p.246.)    In the fourth essay, Yunxiang Yan traces food safety concerns in contemporary China.  Originally, people were concerned with food being poisoned, in part because chicken, for one example, was dumped into lower class food stalls and restaurants.  At the time of Mao and even in the present government enforcement has not prevented poisonous additives and materials from entering food.

Taken separately and together, these essays show the interconnections and continuing changes between national identity, politics, culture, the search for well-being, and the concern with food safety, in East Asia.  These changes and concerns also mirror developments around the world.  Jonathan Kauffman shows similar concerns, for example in the origins of “Hippie Food” in the US, including many of its past and continuing connections to developments in Asia (2018).  Jean-Pierre Poulain sees the same trends in the Kim volume occurring in the United States and France and places food studies as central to understanding cultural, economic, political, and medical changes in any country (2017.) Kim’s collection serves as an assessment of current developments on most of these themes and as a marker for future changes as each country defines its identity and concerns in terms of food movements around the world.

Jonathan Kauffman.  Hippie Food: How Back to the Landers, Longhairs and Revolutionaries Changed the Way We Eat. New York: William Morrow.

Jean-Pierre Poulain.  Translated by Augusta Dior. The Sociology of Food: Eating the Place of Food in Society.  London: Bloomsbury Academic.