Going to Minneapolis for the annual meeting of the American Anthropological Association? Readers of the blog who have never been to Minnesota may be trying to mix business with pleasure by visiting some of the iconic places in the Twin Cities area. I have never traveled to Minnesota but I associate it with three distinct cultural pilgrimages: paying homage to shopping in the same room as a roller coaster, paying homage to Prince, and paying homage to fictional hero, Marge Gunderson, of the 1996 Coen Brothers film, Fargo. With Marge Gunderson, the Coen Brothers gave us one of the most memorable heroes in modern cinema, beloved for her charm, wit, kindness, and bravery. Less notable but still noticeable was Marge Gunderson’s healthy appetite.

When we first meet Brainerd Police Chief Marge Gunderson, she’s being called to police duty at an ungodly hour. Her devoted husband, Norm, wakes up too, “Gotta eat a breakfast, Marge. I’ll fix ya some eggs.” She replies, “Aw, you can sleep, hon.” He sits up, “Ya gotta eat a breakfast…I’ll fix ya some eggs.” Their early morning breakfast together is a tender moment, as are all the moments shared between Marge and Norm in Fargo, most of which involve food. In one scene, Norm brings Marge lunch at the police station, a sandwich and drink from Arby’s. In another scene, they enjoy a hearty lunch together at a buffet restaurant where another police officer delivers Marge phone records relevant to the murder case. 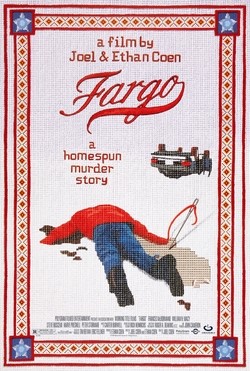 Marge is “Minnesota nice,” whip smart, great at her job, and seven months pregnant. Apart from one case of near-morning sickness at the crime scene, we do not see Marge’s pregnancy affect her work. She never flounders, falters, or even flinches- even in the face of danger in the form of a man putting another man through a wood chipper. But she’s not hardened or gruff like the crime-fighting characters we’re used to. After she realizes she’s been given the runaround by a suspect, the first thing she does is stop at Hardee’s for a breakfast sandwich. There’s an entire scene dedicated to Marge sitting alone in her car, eating her breakfast sandwich, pausing at one point to smile – thus taking a moment of enjoyment during an otherwise stressful time. Like other Coen brother movies, Fargo marries elements of violence with elements of screwball comedy. But its key ingredient is its humanity, best exemplified by Chief Marge Gunderson and her Midwestern charm.

She may not be an anthropologist or even a real person, but as far investigators (of any kind) and food lovers are concerned- Marge Gunderson is the Fictional Patron Saint of Minnesota.  In fact, my trip to the AAA Annual Meeting will coincide with my pilgrimage to pay homage to her. “How?” you ask. I assume you’re asking because you too are interested in this pilgrimage. Although Marge is from Brainerd, the murder investigation brings her down to Minneapolis. While in the Twin Cities, she ends a call to her local police contact, Detective Sibert, with a request: “Would you happen to know a good place for lunch in the downtown area? … The Radisson… Oh yah, is it reasonable?” The Radisson in Minneapolis where Marge Gunderson stays and meets her friend Mike for lunch still exists in downtown Minneapolis. It is now called the Radisson Blu and it is home to a highly acclaimed restaurant. You can lunch there and yah, it’s pretty reasonable.