Thesis Review: Food in the Making 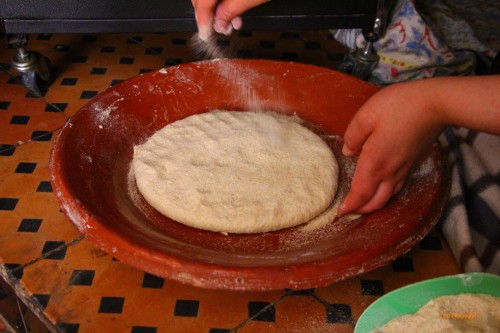 A cook has shaped  a daily bread dough and is sprinkling semolina grains on top so it doesn’t stick when she places it under a cloth to rise before she brings it to the nearby public oven for baking. (Photo: Katharina Graf)

In this thesis, Katharina Graf engages with and explores the daily acts and rhythms of food preparation in lower income households in Marrakech, Morocco. Taking a phenomenological approach to ethnography, Graf assumes the role of an active apprentice in the homes of three Marrakchi women (Fatimzahra, Rachida, and Aicha). She uses her position and the multi-sensory experiences it affords to pursue two central aims—first, to understand the embodied knowledge and processes of reproduction that underlie daily acts of Marrakchi cooking; and second, to probe and expose the changing material and social context of an urbanizing Morocco. Thoughtful in approach, rich in description, and insightful in its analysis, her work contributes meaningfully to the increasingly intersectional fields of food and gender studies, and to the anthropology of knowledge, learning, and the senses, within and beyond Moroccan borders.

In pursuit of these stated aims, Graf leans upon the ethnographic experiences of provisioning, processing, cooking, baking, and sharing meals with her research participants, as well as several key strands of social theory that lend both depth and context to her research. For example, using Ingold’s (2001) concept of an education of attention to frame the process of learning to cook as multi-sensorial and continuous; bringing in Bourdieu’s (1977) notion of habitus to recognize how repetitive practice gives rise to internalized structures that guide acts of Marrakchi cooking as they unfold as a dialogical exchange between cook, food, and environment; and engaging with Sutton’s (2006) view of cooking as a skillful practice, which helps to bridge the materiality of food production with the social nature of its consumption. By weaving together these and many related anthropological, sociological, and philosophical concepts Graf provides a sound theoretical foundation from which to present her empirical work, and effectively recalls key ideas throughout the thesis to note areas of resonance and distinction with her own findings.

The thesis itself is structured around five central chapters, which loosely track the natural sequence of food preparation—from provisioning and processing, to cooking and baking, to sharing and eating food. At the same time, they also follow Graf’s own experiential trajectory from a novice cook primarily tasked with provisioning at the market to an expert entrusted with the preparation of full dishes. The body chapters are bookended by an introduction which lays out the aims of the thesis and introduces its theoretical foundations, and a conclusion framed around the case study of Ramadan—“a month when boundaries are made and unmade and both continuity and change asserted” (p. 228)—that is used to tease out the main findings from her fieldwork. Although innovative and largely effective, an extended conclusion would have afforded an opportunity to remind readers of the key findings from earlier chapters and to also reflect more deeply on the ways in which this thesis confirms and challenges prior research. Graf also artfully intersperses each section of the thesis with a series of six reflective interludes derived from her fieldnotes, providing a nice contrast to the analytical passages of the thesis while also effectively underscoring its phenomenological methodology.

In the first chapter, Graf introduces the historical and geographic context of her fieldsite in Marrakech, using the preparation of bread to illustrate how the city’s foodscape is made (and re-made) through the movement and interactions of cooks and ingredients. In Chapter 2, she shifts her focus to the economic dimensions of cooking, and explores how cooks make decisions about how to source and process ingredients that are good for themselves and their families in a largely unregulated and unstandardized food environment. She articulates two vernacular indices of quality that cooks and consumers in Marrakech use to categorize food items; beldi (‘from the country’) and rumi (‘foreign’). However, origin alone is not the sole criterion evoked by Marrakchi consumers when they make use of such terms. What makes food good (or, beldi) in Morocco involves “a cook’s multi-sensory and ethical assessment . . . relate[d] to taste, provenance, context of production, health and well-being, safety and food security (p. 117).” While this may call to mind similar concepts such as “taste of place” (see: Trubek 2009), Graf argues that a beldi designation is more contingent on personal context and evaluation. For example, a woman would be likely to judge meat from her hometown as beldi even if other products with similar, or even preferable, sensory characteristics were available closer to her current location. In this way, it can be seen that Moroccans have come to rely on a deeply personal and sensory-based evaluation schema for what constitutes good food and good cooking in the absence of externally imposed standards and regulations, thus posing a challenge to the possibility of a shared social context for quality designations.

Chapters 3 and 4 constitute the core of Graf’s thesis and interrogate, in turn, what constitutes cooking knowledge and how girls and women in Marrakech come to acquire and hone it. These explorations give way to Graf’s central argument, which is that cooking and taste knowledge are inherently multi-sensory and synesthetic, and thus learning to cook entails a tactical education of all the senses. These findings largely resonate with Sutton’s (2014) ethnography of home cooking on the Greek island of Kalymnos, yet Graf notes an intriguing difference in the circumstances by which Marrakchi and Kalymnian women learn to become cooks. While older female relatives often coached along young cooks in Kalymnos, the Marrakchi women underwent a “lifelong multi-sensory immersion” yet only truly metamorphosed into active cooks when called to replace the lead food preparer in the household. While the two contexts clearly afford women different opportunities to enact—and thus, embody—their cooking knowledge, the basis of that knowledge in both cases is rooted in continuous exposure to the sensory, material, and social culture of preparing and sharing food.

In this thesis, Graf provides a detailed and multi-dimensional study of Marrakchi home cooking knowledge and its reproduction, while also recognizing the window this topic provides into a changing, urbanizing Morocco. As Marrakchi women increasingly have the opportunity to study and work outside the home to gain financial independence, shifts in the constitution of an ideal family have begun to veer away from larger multi-generational households towards more intimate conjugal dwellings. While Graf suggests that young Marrakchi women still derive a deep sense of identity from preparing food for their families, it stands to question whether this will continue if they struggle to balance the independence achieved from working outside the home with the dependence now placed upon them as the primary food preparers for their immediate households. This study alone cannot provide any certain resolutions to such questions. What this work provides instead is a clear indication that so long as Moroccans continue to value the preparation of foods in the home, there will continue to be people in those households that rise to the occasion of making the meals that are so central to their social and material lives.

Ingold, Tim. “From the Transmission of Representation to the Education of Attention.” In The Debated Mind: Evolutionary Psychology Versus Ethnography. Edited by H. Whitehouse. Oxford, UK: Berg. 2001: 113–153

Trubek, Amy B. The Taste of Place: A Cultural Journey into Terroir. Berkeley, CA: University of California. 2009.