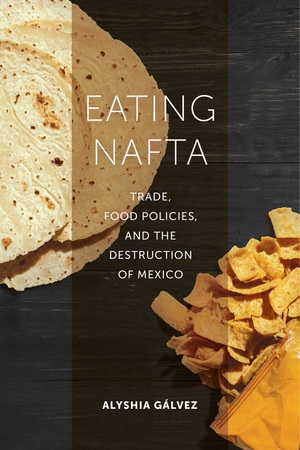 Alyshia Gálvez has written a very important and timely book about the connectedness of international trade agreements, migration, diet-related diseases and the loss of biodiversity. She focuses on the two decades plus since the North American Free Trade Agreement (NAFTA) went into effect in 1994 and its impact on the lives of Mexicans on both sides of the border. Gálvez interweaves large scale statistics from reliable sources with her own ethnographic encounters with people from various walks of life, rural and urban, labor migrants and politicians. She complements her decades-long ethnographic fieldwork with discourse analysis and policy analysis, linking the micro with the macro. She pays particular attention to the changing lifestyles of rural Mexicans who no longer can support themselves with milpa agriculture since the USA began dumping subsidized corn in Mexico. Not only have their diets changed, but they can no longer maintain multigenerational households as they have been sucked into a cash economy and family members have migrated to cities and abroad in pursuit of cash. She tells us that today Mexico imports 42% of its food and has a 55.1% poverty rate. She tells us that the top three causes of death and disability are now diet-related chronic diseases. She tells us that in 2007, 12.8 million Mexicans were residing in the USA. She proposes in the Introduction that we consider this as a kind of structural violence. “’Gringos’ clamor for handmade tortillas, while Mexicans have become the world’s top consumers of instant noodles” (p. 10).

Chapter Two provides an ethnographic look at the elevation of traditional Mexican food into the world of haute cuisine, blessed by René Redzepi, the celebrated Danish chef. Gálvez examines “the role of narrative capital in telling certain kinds of stories that simultaneously romanticize specific elements of cuisine (like hand-ground landrace corn), while cleaving them from the historical conditions of their production and the people responsible for their development and custodianship over millennia” (p.30). Mexican cuisine was inducted into UNESCO’s list of Intangible Cultural Heritage in 2010. Gálvez addresses the timelessness of the UNESCO description, while providing examples of changes in Mexican cuisine since the Spanish conquest, and notably since NAFTA. Some farmers of landrace corn fed it to their animals because the price and demand was so low, but today, top chefs are paying premium prices for ancestral corn that they serve along with huitlacoche, insect larvae, mezcal, and other traditional Mexican foods that have been newly discovered by elite chefs and diners. Gálvez stresses the importance of stories and who gets to tell them. She recounts stories that Mexican farmers tell about hybrid vs. criollo corn. Hybrid corn “requires more water and pesticides, costs more, and behaves like a spoiled baby” (p. 60) according to Nahuatl-speaking farmers of  Asunción Miahuatlán. Other farmers justify the higher cost of raising hybrid corn with market demand for the larger ears eaten as corn on the cob.

Chapter Three shifts from corn to goats, but repeats the messy pattern of some people deciding to continue raising criollo goats which taste better while others follow the advice of government agronomists to invest in fancy goats. Gálvez rehearses for us the history of Mexico’s development policy and the constant desire to make agricultural production more “efficient.” She argues that small-scale agriculture is compatible with other subsistence and economic activities and it ensures biodiversity and environmental sustainability. Central to her argument is the contrast between a market-driven food security model promoted by free trade agreements, such as NAFTA, and a food sovereignty model that calls for democratic control of the food system. As marginalized rural residents are blamed for Mexico’s “inefficiency,” their displacement has led to increased consumption of US products and labor migration to the US, both actions subsidizing the US economy.

Chapter Four begins with a description of Doña Yolanda’s small store, filled with candy and other processed foods. Stores like this are typical in many poor countries, so I was glad that Gálvez spent some time explaining the attraction of getting into this type of business and the competition they face from larger chains, such as Oxxo and Walmart. She describes how processed food at first marked cosmopolitan modernity, but now is associated with lower status. Mexicans have embodied free trade and the nutrition transition in the form of widespread obesity, though Gálvez questions whether the cause is skyrocketing consumption of sugar or the myriad chemicals used in farming and food processing. She states that chemical exports from the US to Mexico increased 97% in the first decade after NAFTA was passed.

Chapter Five addresses strategies to combat obesity and diabetes in Mexico. Here, Gálvez points out that the solutions to this problem always seem to rest on the individual and don’t address changes in the larger food system. She, then describes three parts of the Mexican government’s response to diabetes and obesity: the soda tax and regulations on food marketing; the anti-poverty program, Prospera; and the Crusade against Hunger. She shows how the latter two strategies propel people towards a cash-based economy and away from traditional knowledge concerning healthy food. She ends the chapter with a discussion of women’s labor and how, even when working outside the home, women are expected to be responsible for the diets of their families. As their access to money increases and their time decreases, they are more likely to rely on prepared foods. The author points out that it is not fair that they and not the state should be held responsible for obesity.

Chapter Six looks at diabetes and asks about the role of migration in the rise of this disease. The focus is on the relationship between stress and diabetes on one hand and stress and migration on the other. She cites Mendenhall’s work on syndemic suffering which calls attention to the intersection of both diseases and epidemic social problems. Research is only beginning to explore the connections between diabetes and stressors such as separation from family members, discrimination, labor exploitation, poverty and lack of health insurance. The diets of migrants change, but also the migradollars they repatriate increase the consumption of larger quantities of processed foods back home.

Chapter Seven begins with watercress, a food that many Latin Americans have a nostalgic response to, but that never figures into stereotypes of Latin American cuisine. Gálvez asks “how many humble but clearly significant foods are forgotten in the transition to more urban lifestyles or with migration?” (p. 174). She also asks how much of our nostalgia for certain foods is nostalgia for the contexts in which they were produced and eaten and notes that migration intensifies nostalgia for specific places and tastes, especially when free circulation is prevented. Decontextualization enabled traditional foods to be appropriated and commodified like the expensive tamales offered by Williams -Sonoma or McDonald’s McBurrito. In response, food activists are promoting traditional foods and their health benefits as part of food sovereignty. At the same time that traditional Mexican cuisine is going global, global products like Coca-Cola have invaded indigenous culture and ritual and this, in turn, has become a useful marketing tool.

In the Conclusion, Gálvez tells the story of one Mexican migrant to New York who found his way back to the land with help from a non-profit called GrowNYC. The migrant in this story stands in contrast to the multitude of Mexican migrants who have become “’surplus bodies,’ and bodies as repositories of surpluses, storing the products of overproduction and uneven trade negotiations” (p. 192). Gálvez proposes that the rise of diet-related illness in Mexico is “a logical result of the prioritization of foreign direct investment, industrial agriculture, theories of comparative advantage, and a specific role of development that sees no role for small-scale agriculture” (pp. 192-193). At the end of the book, she takes us back to alternative movements such as GrowNYC that promote social justice, resistance and resilience  while promoting ways of eating that “build our connections to each other and to land and culture” (p. 199). Nevertheless, she warns that solutions require more than consumer activism at the local level.

Throughout the book, Gálvez often shifts her discourse from explaining to giving the reader insight into the conversations and observations that led her to make particular points. Sometimes these are descriptions of encounters; at other times, direct transcriptions from interviews in Spanish. These are not translated in the text, but merely summarized and commented on. (Interested readers can find the exact translations in the endnotes.) It’s a refreshing style that maintains reader interest in the topics at hand while also opening the research curtain. Gálvez successfully presents the complexity of a food system gone awry and the important role played by NAFTA. I highly recommend it as a text in courses dealing with food systems, social justice, migration and public policy, as well as courses on Latin America.