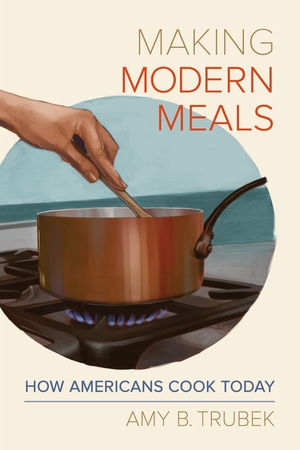 Making Modern Meals is a valuable addition to the growing literature on cooking and food preparation. Amy B. Trubek’s new book provides a kaleidoscopic perspective on all sorts of cooks: home cooks under pressure to produce a healthy meal for their families, people who cook to earn their livelihood, singles and professionals seeking to create the perfect meal as well as crafty bakers who trust their hands more than machines and the food industry. In this breadth of viewpoints onto the everyday practice of cooking lies the strength and novelty of this book. By pairing ethnographic case studies with surveys, statistics, cookbooks and historical sources, Trubek documents how cooking as a chore, as an occupation, as art and as a craft has changed over the last century in America. She found that despite a widespread perception that cooking and its associated knowledge and skills are declining, Americans do in fact have a decent level of cooking capabilities, but they do not necessarily make use of them every day largely due to the time constraints imposed by modern life.

The first chapter engages with what Trubek argues is the most common association with the role of the cook: the domestic female cook who considers cooking first and foremost a chore and an obligation to others. Through a brief history of the domestic science movement later turned home economics, she traces the still strong links between ideals of domesticity and home cooking. Despite the broadening of choices from pre-processed foods and eating   out options especially since the 1950s, women as mothers remain symbolically tethered to most domestic tasks related to everyday nourishment and nurturance. While she briefly focuses on learning to cook and the reproduction of knowledge, the main focus here is on formalised teaching through the domestic science movement   and popular cookbooks and less on the lived experiences of learning and knowing cooking as the book sets out to do.

The second chapter constitutes a special gem in that it reveals the hidden faces of much of everyday cooking over the last century, “the invisible army” (p. 72) of paid cooks. During the first half of the 20th century these tended to be domestic servants in middle class households, often poor girls and women of colour, whereas during the second half these are increasingly paid cooks, often migrants to America, in restaurants, take-aways and other non-domestic locations. In this story of substitution, as Trubek calls this shift, it is not only technological advances that have increased the possibilities for cooking, but especially “other people [who] help us to cook or not to cook” (p. 71, original emphasis), and this, she argues, since before the 1950s when pre-processed foods and fast foods significantly enlarged consumption choices.   She convincingly shows that while cooking has always constituted an occupation, the locations where paid cooks work have shifted into the public realm and multiplied over the last several decades. Importantly, she points out that much of American cuisine – past and present – is created and reproduced by these paid and often marginalised cooks, and whose knowledge and skill are far from disappearing.

In chapter three Trubek proposes considering cooking as a form of art, which she defines as virtuosity emerging in a dish that is prepared in a creative process and/or when the cook possesses an internalized aesthetic standard. According to her, in creative cooking the boundaries between professional and domestic cooking are blurred, and knowledge and skill emerge through varied bodily, formal and social experiences. To complement the predominant focus on domestic settings, Trubek briefly ventures into French Haute Cuisine and the upholding of a codified standard amongst professional chefs. Although she concludes that a cook’s aesthetics and standards are fluid, responsive and embedded in the sensuous experiences of cooks and eaters alike, throughout this chapter Trubek creates an unfortunate contrast between professional or leisurely cooking as creative and artful and everyday cooking as uncreative and largely lacking a standard, with the former being exemplified through mainly male and the latter through female cooks.

The fourth chapter treats cooking as a craft that simultaneously upholds certain skills and a larger way of life and identity. Trubek charts the history of baking, which has been one of the first domains of food preparation to be fully industrialized, but which in recent years has seen a revival as a craft through both artisanal and home bakers. We learn that cooking from scratch, and baking in particular, can be considered an oppositional category that resists technological and industrial means of making food and embraces the principles of embodiment and mastery. As such, crafty cooking shows the “evidence of the hand” (p. 186). In contrast to a growing emphasis on the final product rather than the process in much of contemporary American cooking, Trubek argues that craft cooks show fidelity to the process rather than the product of their work and, in doing so, “work toward a tradition” (p. 177), whilst also incorporating decades of advances in food science and technology.

The last chapter on health comes back to the first chapter in linking cooking as a chore to the underlying morality of cooking, whereby a century of home economics instruction has contributed to equating a failure to eat “healthy” with a cook’s failure to fulfil her (motherly) caregiving and her moral and civic obligations more broadly. Furthermore, Trubek shows not only that most domestic cooks are aware of micronutrients and dietary guidelines, but also that especially provisioning and choosing the “right” ingredients for a meal are as important for them, yet often ignored in research and national dietary advice. At the same time, her ethnographic cases illustrate that knowing and doing are often disconnected in everyday cooking due to a lack of time, making health a more aspirational category, but one that especially in today’s multifaceted food system requires a cook’s knowledge and skill to be vigilant in the market, the restaurant and the home.

While this book provides a unique breadth of perspectives on the practice of cooking, Trubek does not bring these different categories of cooking together in a comprehensive analytical framework. The resultant picture is colourful and rich in its range from home cooks, paid cooks, creative professionals and leisurely cooks, yet, domestic and everyday cooking is still described as a mother’s duty despite a growing range of alternatives to home cooking, paid cooks remain surprisingly hidden in Trubek’s ethnographic accounts, artful and creative cooking seems to take place outside of these ordinary spheres and persists as a mainly professional and male domain and, finally, crafty cooking stands out as that form of food preparation which upholds traditions and resists our current food system, while remaining seemingly incompatible with the fast-paced reality of most cooks’ everyday life. The reader is left wondering what unites these different categories of cooking despite more than a century of large and small revolutions in our kitchens and comes away with an uneasy feeling of “plus ça change, …”.

Overall, however, this book succeeds in showing the many ways in which cooking as a daily practice is far from declining. Indeed, Making Modern Meals effortlessly shows that to understand how knowledgeable Americans make modern meals today, we have to identify and represent all cooks. This book thus makes an essential read for anyone interested in the practice of cooking in a thoroughly industrialized society, both from a historical and a contemporary angle. The deliberate combined focus on home cooks and paid cooks, on lay and professional expertise in routine and leisurely settings bridges the gap between the hitherto predominantly divided ethnographic contexts of professional and domestic food contexts. Readers with an interest in empirical research will also benefit from the broad range of methods used for this research, ranging from participant observation, interviews and videotaping to surveys, statistical data, cookbooks and historical documents, which fruitfully complement one another.