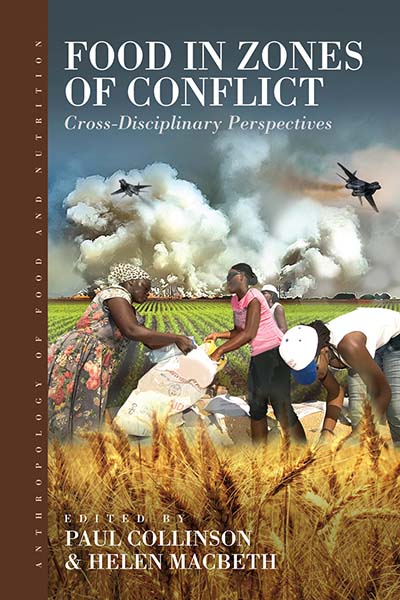 Food in Zones of Conflict is a multi-disciplinary volume on global studies in food and conflict consisting of sixteen chapters that each present a unique perspective on the issue. Covering a wide range of geographic areas, including sub-Saharan Africa, Sri Lanka, Sierra Leone, Croatia, Mexico, and Ethiopia, Food in Zones of Conflict emphasizes the need to examine inequalities and inequities in access to food, especially in times of conflict. Addressing concerns that seem all the more relevant in today’s political climate, the chapters demonstrate how food insecurity and conflict are often intertwined, with conflict causing food insecurity and food insecurity causing conflict, thereby creating a cyclical epidemic in these zones of conflict. The emphasis of this cycle also serves to illustrate the political significance of food, both as a means of social control and as an impetus for inciting rebellions and riots. Rusca’s chapter exemplifies this, utilizing examples from a post-World War I Weimar Republic, where famine was used both as a means to bring the Germans to heel after their involvement in the war, and as propaganda allowing the National Socialists to rise to power.

Food insecurity and conflict often also contribute to syndemic conditions, including trauma, disease, and poverty, as illustrated by a number of authors in this volume. Of course, as Shepler noted, these syndemic conditions often impact those who are of lower socioeconomic status, as the individuals who are fortunate enough to have fewer inequities are more likely to have the resources to eat better during times of conflict. Meanwhile, as Adeyemi Oyeniyi and Akinyoade demonstrated, these syndemic conditions are most likely going to affect those who produce the food for a country, creating a conundrum where these food producers and farmers cannot access the food they are growing, either because of physical barriers from the conflict or economic barriers due to their social class. It should be noted that removing individuals from these zones of conflict does not necessarily mean that food insecurity comes to an end, as Henry and Macbeth so aptly articulate in their chapter on nutritional concerns facing those who reside in refugee camps.

In her chapter on household food consumption in Sri Lanka, Kent provides an alternative measure to the USDA Household Food Security Survey Module. Instead of relying on the USDA measure, Kent sorted households into categories based on household consumption patterns that also took seasonal patterns of food shortage into account, thereby allowing for Kent to adequately assess if households dealt with food insecurity on a daily basis or only seasonally. Kimaro, on the other hand, utilized the three pillars of food insecurity—availability, access, and use—to ascertain the role that religion may play in the search for food security in sub-Saharan Africa. Finally, several chapters explore the complexity of identity and food in conflict, with Cwiertka discussing the implications of globalization as soldiers on the Pacific Front received provision packages during World War II. Meanwhile Campbell provided a more personal story, discussing the identity crisis faced by American soldiers deployed in Iraq who often had to choose between eating MREs, going hungry, or willingly consuming “the enemy’s” food.

Yet while Collinson and Macbeth did an excellent job of compiling a wide range of studies in food and conflict, it is worth noting that a number of the studies take a historical approach, especially those that discuss food issues during WWI and WWII. That said, these case studies, while dated, contribute to the existing literature and provide potential frameworks for other studies to utilize in their examination of food and conflict. Given this, it should be noted that many of the case studies in this volume could benefit from the application of a more applied approach, or at least an examination of how these examples from the past can contribute to contemporary issues of food in zones of conflict today. This lack of an applied approach is felt especially when the chapters are examined in the larger context of conflict today, with refugee crises in Syria, South Sudan, Afghanistan, Somalia, and Myanmar. Furthermore, given the conflicts in the United States with regards to immigrants, detention centers, and the increased border patrol presence in the U.S.-Mexico border region, an applied approach that speaks to current instabilities seems all the more relevant today.

Finally, Food in Zones of Conflict could benefit from additional theoretical and methodological grounding. As it is written, the volume serves as a “taste test,” allowing the reader to skim the surface of a number of issues that arise in areas of conflict, from food insecurity to human rights violations to the pervasive use of food as a way to wield power over people. While this approach succeeds in providing the reader with a review of the current literature, it misses an opportunity to contribute to the reader’s theoretical understanding, despite having a multitude of opportunities to interweave contemporary theories. For example, while some chapters touched on the embodied consequences of conflict, the continued shaping of practice and agency surrounding food choices and practices is largely overlooked. Furthermore, given the emphasis on the interconnectedness between food, conflict, and power, it seems strange that theories of power, syndemics, political economy, and structural violence were not further expanded upon in order to strengthen the arguments made by the authors.

In sum, despite the seeming lack of theoretical contribution, Food in Zones of Conflict is an excellent read for anyone who is interested in the issue. The broad range of topics, time periods, and geographic locations make the volume approachable to those who are only seeking to gain a grounding in the topic while the focus on food insecurity also makes this volume ideal for any academic seeking to review the current literature. Furthermore, the interdisciplinary perspectives provided by the authors make these case studies relevant to a number of fields, including anthropology, history, sociology, public health, and food policy and planning. Given the accessibility of the volume to a number of audiences, I expect that Collinson and Macbeth’s edited work will influence future food studies in zones of conflict for years to come.