Someone tried to burn down the Flaming Torch restaurant last week. The restaurant, 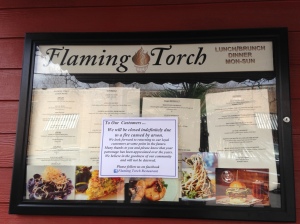 located in my neighborhood in New Orleans, is a French bistro that has been in business since 2004. It is small and friendly, with good French food, a little bit fancy (they have tablecloths), but very much part of the neighborhood. It is a reliable place for locals seeking classic French dishes (they make a great coq au vin), not a tourist destination. I have eaten there many times, but I especially remember eating there soon after Hurricane Katrina. The Flaming Torch was one of the first restaurants in the neighborhood to reopen and although they were desperately short-staffed, their presence was deeply appreciated by those of us who had come back to the city, because they provided a much-needed place to reunite with neighbors around good food and wine.

The fire, according to news reports, was deliberately set. The owner, Zohreh Khalegi, says she was upstairs, doing inventory, when someone broke into the dining room, doused the place with gasoline, and set it on fire. At least some of this was recorded by a security camera. She escaped to the roof and was rescued by the fire department. The interior damage is apparently quite extensive, so the restaurant’s future is uncertain. 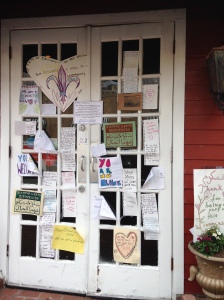 The arsonist’s motives are unclear, but suspicions have been raised that this may have been a hate crime. Zohreh Khalegi, who started the restaurant with her late husband Hassan Khalegi, is an American citizen who immigrated decades ago from Iran. Although their origins were no secret, until recently there was very little in the restaurant that might have indicated the owners had any ties to Iran. In the last few years, the restaurant had begun to feature occasional special menus with Persian food. Certainly, for many people, this only made the restaurant more attractive, since there are not many other places to eat Persian food in the area. But the current American political context seems to have encouraged and given legitimacy to prejudice against people from countries like Iran (one of the countries subject to President Trump’s immigration ban). Could such prejudice have motivated someone to act against the restaurant? As far as I know, nobody has claimed responsibility for this act. But there have been threats and incidents of violence against immigrants and minorities all over the country since the presidential election. All of this is of grave concern and if the fire at the Flaming Torch is any indication, such things must be taken very seriously.

We do not know if this crime was related to anti-immigrant prejudice. But the fact that people are ready to believe that it is suggests that the political climate in the United States has reached a point (not, of course, for the first time) of critical danger. From fine dining to neighborhood diners, immigrants from many countries play a major role in the American restaurant industry. In New Orleans, as elsewhere in the United States, there are many restaurants owned and operated by people from predominantly Muslim countries, serving food from those regions. There are also many immigrants (perhaps most) who prepare and sell foods that have nothing to do with their origins, so they may not be visible as sellers of foods associated with immigrants. All of them may be targets for people who want to advance the nationalist agenda that has accompanied the rise of President Trump. 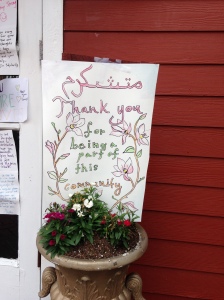 There has been an outpouring of support for Zohreh Khalegi and for the restaurant. People have posted testimonials and statements of support on the restaurant’s doors. Money has been raised to help with expenses. There are many people here in New Orleans who are eager to show their solidarity. The stakes involved are very high. By choosing to stand by owners of restaurants and other businesses that are targeted by racists and nationalists, we make a statement about what kind of community and nation we want to live in. We must all consider where we stand at this moment and what we will do to make sure that heated political rhetoric is not turned into more violence.

So why document this on an anthropology blog? There is a lot that anthropologists and other social scientists can do—and are doing—to help us understand the rise of nationalism and fear around the world in recent years. For anthropologists, this sort of incident can be an opportunity to think about how institutions like restaurants tie communities together, as well as about the ways violence, fear, and terror, can work to tear communities apart. We can call attention to the way such acts are named and discussed. President Trump recently claimed that many acts of terror are not adequately covered by the media and that, as a consequence, people do not take the threat of terror seriously enough. This act of arson, if it turns out to have been motivated by politics or hate, is an act of terror, but one that Mr. Trump will probably not define as terror, either because it is too small or because it had the wrong sort of victims. Yet acts of mass violence, including attacks on restaurants, schools, or religious communities, create exactly the kind of fear that terrorists try to achieve. We need to document the impact of these events and examine why they are interpreted by people as acts of terror. And, in this case, we can also show people coming together to resist and to show solidarity. In doing all of this, anthropology can help increase understanding and help resist those who would sow fear among us. 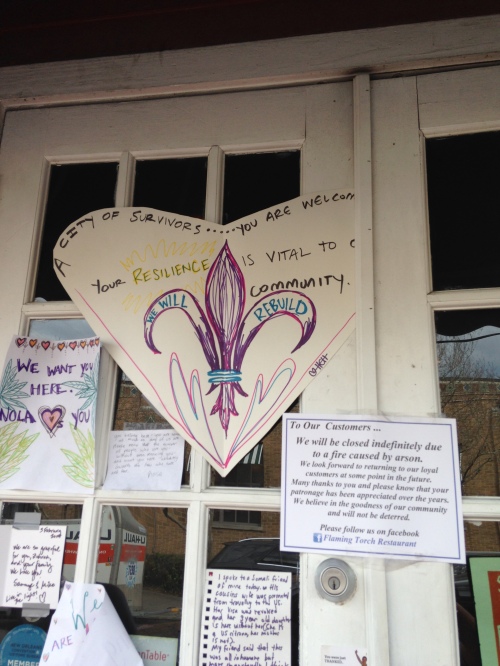 4 responses to “Fear, Fire, and Solidarity in New Orleans”