While there are many conferences of potential interest to food anthropologists, last weekend (December 3-4, 2016), I attended a conference that I found particularly useful and inspiring: the 6th annual Asian Food Studies Conference.

This is a conference that attracts historians, nutritionists, anthropologists, and researchers from fields like hospitality and tourism. The diverse presentation topics included these titles: “Chinese Ancient Food Culture Implied in Oracle-bone inscriptions” (Cheng Xuerong), “The Comprehensive Discourse on Edible Flowers in Pre-modern China” (Liu Jun Li), “Plagiarism and Originality: Focused on the Study of Modern Printed Cookbooks in Early 20th Century Korea” (Ra Yeon-jae), “Nutrition Education Affects the Use of an Escalator and Elevator to Reach a Women’s College on a Hilltop” (Ishihara Kengo and Takaishi Tetsuo), and “Beyond the ‘Super Shark’ Myth: Promoting Sustainable Shark Foodways in Japan and Asia” (Akamine Jun).

What really impressed me, however, was the true sense of internationalism evident at the conference. The conference’s venue changes every year. Last year the conference was held in Shangdong, China, this year in Kusatsu, Japan (hosted by Ritsumeikan University), and next year the conference venue will be in Korea. There are presentations in multiple languages (this year: Chinese, Japanese, and English). The first day’s keynote speeches, one in each language, were translated into the other two. But beyond this, the conference theme—Exchange and Dynamism of Food Culture in Asia—encouraged presentations of research that was itself transdisciplinary and transnational, with a mission toward forging connections and sharing knowledge.

Takagi Hitoshi explaining how the Miskito categorize and use different parts of the sea turtles they hunt.

Let me give some examples. One of the panels on the first day included presenters from Malaysia, the Philippines, the US, Bulgaria, and Korea. All of the research on this panel had an obvious transnational component. A key example of such a project would be Korean scholar Ja Young Choe’s (Hong Kong Polytechnic University) research on the relative popularity of various Asian cuisines (Japanese, Korean, Thai, Indian—in that order) in Hong Kong. On the second day Francoise Sabban’s research on the culinary perceptions of French and Chinese diplomats and envoys in the 19th century, Takagi Hitoshi’s observations from fieldwork conducted among the sea turtle hunting Miskito of the Caribbean, and Osawa Yoshimi’s probing of the simultaneous global appeal of umami and distrust of MSG are other examples. 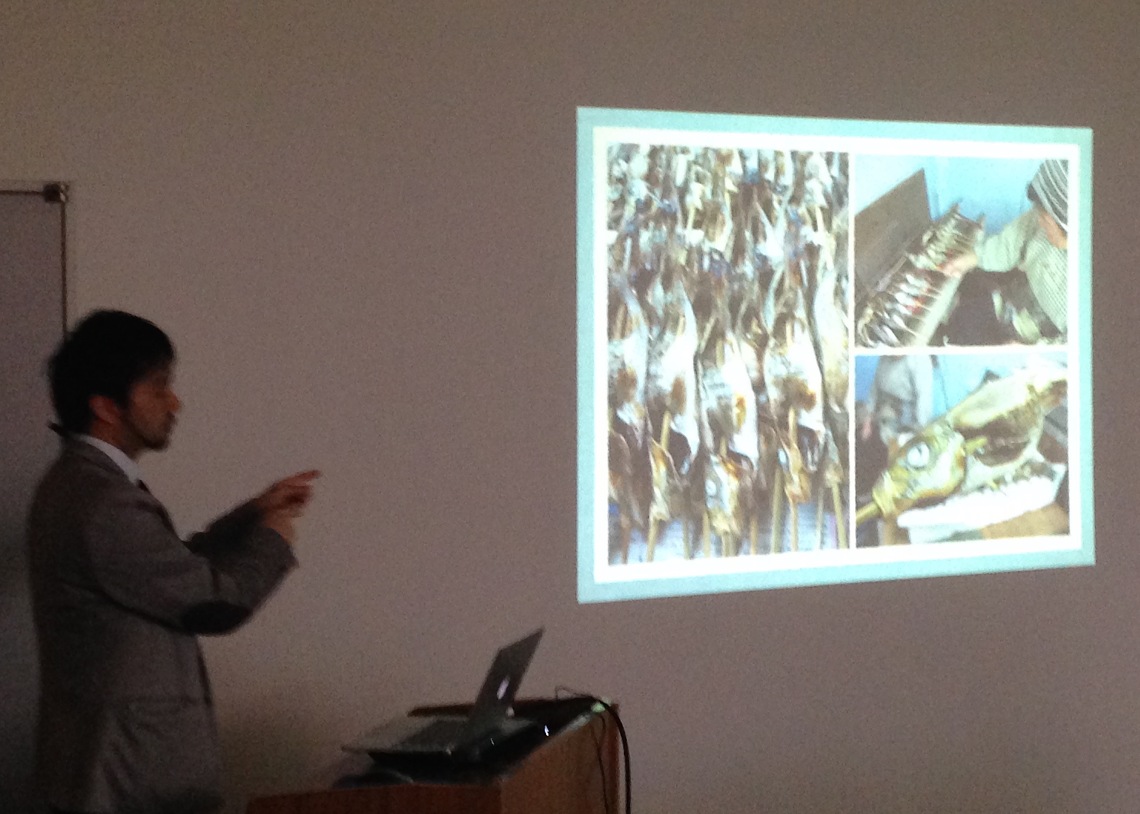 Representing SAFN at the conference, Shingo Hamada presented new research on obstacles to commoditizing traditional fermented foods in Japan’s contemporary Fukui prefecture and I explained how Kyoto cuisine has benefited from international support (collaborators, promoters, funders) and resources (ingredients, ideas, technology) from far outside of Japan.

Next year, the conference will be hosted in South Korea. I heartily recommend attending to anyone interested in the topics of transnationalism, food, and Asia.

Greg de St. Maurice is a Postdoctoral Research Fellow at Ryukoku University where he is conducting research on changes in domestic Japanese foodways over the past four decades. He earned his PhD in Cultural Anthropology from the University of Pittsburgh in 2015. He also holds Master’s degrees in Social Anthropology (Oxford University) and International Relations (American University, Ritsumeikan University). His key research interests include globalization, taste, place and place brands, chefs and cuisine, and Japan. He was on a Fulbright in Japan in 2011-2012 and his work has appeared in Etnofoor, Digest, and edited volumes about food culture and food activism. View all posts by Greg de St. Maurice