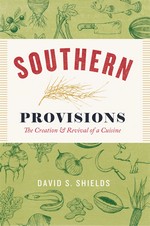 Did you ever wonder where Carolina Gold Rice and other southern rices come from? Or what kinds of beans and peas, root vegetables and herbs, were typical of these “lowcountry” cuisines, and how these products were introduced and integrated?  Do you care about regional U.S. cooking and revivals, and the place of culinary history in such constructions or reconstructions?  Then this is the book for you.  The author, who is the principal of the Carolina Gold Rice Foundation, which provides the seeds for this Carolina Gold Rice and southern culinary revival, has done exhaustive research.  He documents how scholars and food professionals and amateurs interested in rediscovering the flavors of traditional southern dishes worked from cookbooks, gardening records, and other historical culinary documents to create the historical “table” of 18th and 19th century southern cuisine, and then went about the arduous but ultimately rewarding tasks of finding the food varieties that farmers could plant and harvest to make these reconstructions possible.  This reversal of the usual “farm to table” mantra is supremely effective as an organizing tool, as the first half of the volume describes the history, institutions, concepts and methods, and the second half charts, crop by crop, the findings, which allow the understanding of cookery, gardening, field crops, and meals to inform the recovery of seeds, soil and water conditions, that revive the historical flavors and values of these foods and combinations.  The sheer diversity of plant materials is daunting.  In the earlier chapters, Shields lists the historical seed sources for 31 different varieties of beans, 37 different varieties of peas, 24 different kinds of turnips, ten different broccolis (white, purple, and green), and so on, although he finds evidence of only one potato and and a single tomato variety.  The seeds for these various crops came from Europe, the Northeast (NY) or in some cases, fellow southerners.  But the point is to recover and revive the foods, not only the seed sources.

I was particularly interested in Carolina Gold Rice, which must be distinguished from the modern GMO Golden Rice prototype, where the golden color permeates the edible seed. Using modern genetic mapping technologies, scientists have now traced Carolina Gold’s genealogy to a variety in Ghana, although the route by which this rice reached the Carolinas is open to interpretation.  The Carolina rice’s husk is gold, as are the (unhusked) seeds.  After reviving this variety, the Carolina Gold Rice Foundation also revived an aromatic Charleston Gold Rice, which is similarly attractive in basic characteristics and adds scent.  Alongside these varieties, Shields sorts out the many European, Asian, and African sources that contributed to the South’s seed selections; their agronomic (productivity) and flavor (all sensory) profiles, as these influenced the rice preferences of producers, cooks, and consumers.  An indication of the precise, sensory-rich, detailed writing is the description, that “Gold seed yielded more per acre than the Piedmontese rice, exceeded it for pearly translucence,and surpassed it in lustrous mouth feel and wholesome taste” (p.237).  Knowledgeable cooks could furthermore distinguish the particular places or farms that produced their rice, which carried the very distinctive flavors of their soils and river-water of origin.  The reader also learns that this rice must be produced organically; additional enrichment of soils with chemical fertilizers will cause the rice vegetation to grow weedy and the seed heads plus stalks to lodge and fall over.  The reader also learns about weedy rice pests, especially red rice, which effectively competes with the cultigen, and the low-tech ways farmers must distinguish rice seed with lower or higher weed seeds by visually sampling and inspecting their contamination, or later invest significant manual labor in weeding.  Numerous historical supply notes and recipes indicate that white rice, as a staple food, was often paired with hominy (corn grits) and pulses (peas or beans). Rice furthermore served as a major ingredient in breakfast foods, in addition to later-day meals, at a time, prior to the technology of puffing rice for breakfast cereals, when the first major meal of the workday demanded hearty fare.  Additional chapters give similarly detailed histories of sugar cane, sorghum, oil, and peanuts, with a final concluding chapter returning to the distinctive taste of the south’s distinctive white flint corn.

Reading these descriptions in the wake of Mark Schatzker’s illuminating accounts of the subtle chemistry of flavors (The Dorito Effect., NY: Simon & Schuster, 2015) helps add to understandings of the agronomic as well as genetics of rice varieties and their sensory attributes.