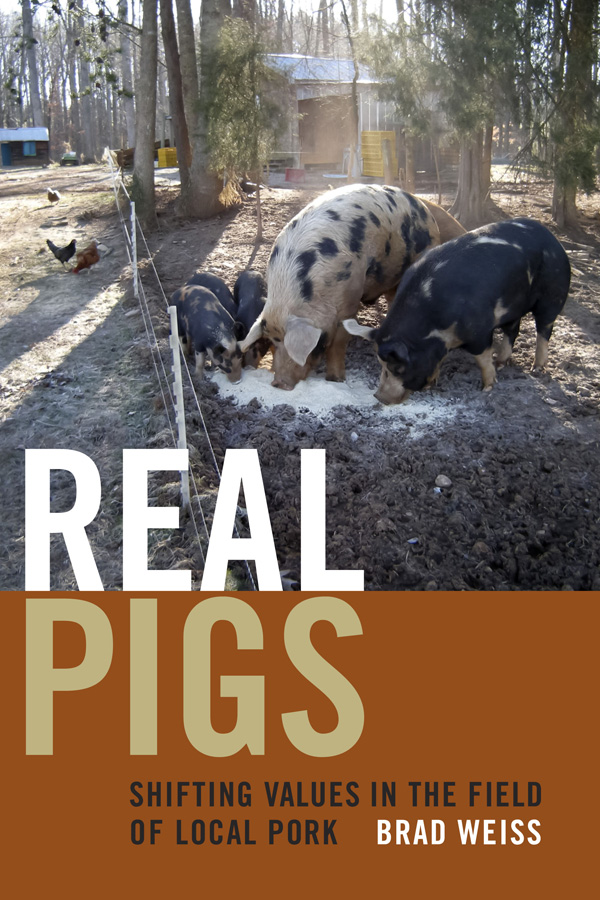 This book is an ethnography of the various actors behind the local market for pasture-raised pork in North Carolina’s Piedmont region. It is based on fieldwork on farms, farmer’s markets, in butcher shops and restaurants. This impressive number of fields allows the author to describe the whole system of local pig production from the historic ancestry of the pigs in question to the eventual headcheese spread on crackers at the end. It offers a detailed account of the values, practices and networks that go into the creation of slow, local, food systems readers like us tend to appreciate.

The central objective of the book is to show how social actions and networks produce “real” pigs. To this end, the author explores all dimensions of the local pork production process (including the cultivation of the cross-breed, husbandry practices, butchery, marketing and cooking) and shows how they are connected in a network of producers and consumers and embodied by the pigs themselves in both a material and symbolic sense. This embodiment of practices and social relations is what makes these pigs real: more real than pigs raised in industrial confinement systems which are characterized by a fragmentation of history, place, animals, workers and consumers.

The author’s ambitious theoretical approach is to combine political economic questions of production and consumption relations with phenomenological interpretations of the symbolic and embodied qualities of pastured pigs. While he does consistently show how the two are inextricably intertwined, relying heavily on Bourdieu’s theory of practice which roots the meaning of distinctive, class-affirming consumptive practices and preferences in social class position stemming from production relations, the book reads more as a phenomenological ethnography. It is important to realize this before reading this book, as it is written in dense discourse that may stump an unassuming reader. The emphasis on phenomenological interpretations might negatively affect the book’s accessibility to students and lay readers interested in the workings of local food systems.

While the author is clearly personally invested in and enthusiastic about pastured pork in his home state, he thankfully does not romanticize or naturalize the system, the people, or the pigs in a Pollanesque way. At the same time, much as he wants to, the author is also not able to use his deep understanding of this local system to formulate a vision for a viable, revolutionary alternative to industrial hog farming confinement operations. He does show that the niche market for pastured pork emerged out of the conditions created by this system, which he describes in an historic overview in chapter 1, but this representation solidifies the distinction between the two systems rather than offering a hopeful view of the kinds of transformation that this niche market and their inspired actors might bring about in the broader system. Part of the problem is that what really motivated food activists to try to create an alternative to this system was not the working conditions and lives of the human growers and processers exploited by this system, but the environmental consequences and sustainability concerns of this way of producing food.  Weiss recognizes and honestly exposes this (unintended) racism and classism of the alternative food movement but ultimately offers no critique and no prospective solutions.

Chapter two is about the construction of the local and describes how the networks of actors and their practices helped re-establish a connection between taste and place that was severed by the industrialization of pig farming and its reliance on enclosed confinement systems that got pigs “off the ground”. He shows in this chapter how raising pigs “on the ground” changes the meaning (and I would have added price) of the final product into local pork. In so doing, he denaturalizes the notion of terroir and shows how this is not some innate quality of a physical place, but actively constituted by the people at work in the local food system. He also describes how particular husbandry techniques help develop a distinctive taste in the pork, so that the pork from this system comes to taste of the way it was raised (“funky”, “like barnyard”): This is a lucid example of the way in which these heritage pigs embody social practices. The process of teaching consumers to discern this flavor, through branding, is also part of this and critically important, for if people could not taste the difference between industrial pork and local pork (and actually, not everybody in the book can) there would be less reason to buy it.

Chapter 3 takes a similar denaturalizing approach to the notion of heritage. Weiss explains that it is not the actual genetic lineage of the Ossabaw Island Hog that establish its meat as local heritage pork, but the various practices, activities and discourse that give it this meaning. The meaning of this pork still stems from biology however, because certain husbandry techniques actually alter the genetic makeup of these pigs, which is another excellent example of the biocultural nature of the embodiment of practices and meaning in local pigs.

Chapter 4 offers an ethnographic account of artisanal butchery programs that allow consumers to butcher parts of their own pig and thus gets a hands-on connection to the animal and the craft. These classes facilitate a bodily experience, not only of what it means to be an artisanal butcher, but also of the physical animal itself that is obviously missing from the experience of buying a piece of pork in a supermarket.

Probably the most successful chapter in terms of combining political economy and phenomenology is chapter 5, which considers pork fat and how the experience of its taste motivates and gives shape to alternative modes of pig production and consumption. Though this sounds like a classic Mintzian story, Weiss delves deeper into how best to understand the sensory experience and perception of taste anthropologically, before showing how the taste of fatty pork inspired the production process that brings it into being and became an important foundation for the local market in pastured pork. He explains that taste is more than a personal and ephemeral experience, but also inherently social in nature, requiring memories, experiences, social networks and cultural capital to be recognized, appreciated, and communicated. Because of this social nature, taste can inspire social action and thus have political economic effects. He also describes how the taste of fatty pork came to stand in contrast to the industrial pork production system itself. We are reminded of the fact that many Americans do not seem to think of pork as a strongly flavorful meat, because of the way industrial pork production methods have changed pigs to yield lean bacon and long, lean tenderloins. This means that in this central North Carolina community, supermarket pork’s lack of fat has been turned into a visceral, sensory example of the inferiority of industrial production methods. By contrast, the abundant fat in pastured pigs is understood as a materialization of the superior local production process. The shared experience and appreciation of the taste of fatty pork creates and maintains these essential production and consumption networks that are vital to the success of the market, demonstrating neatly how phenomenological, as well as political economic qualities are expressed in pigs simultaneously.

Chapter 6 describes how authenticity is derived from the way this local pork system re-establishes connections between producers and consumers with farm to fork production and between the various animal parts with snout to tail cookery. He describes how the culinary approach based on reconfiguring pork as a whole pig came about and how people and pigs are joined in production practices that incorporate the whole animal. The author also tries to describe the political economic implications of farm to fork and snout to tail activities and how these relationships are expressed in concrete qualities of local pastured pork that are appreciated by discerning consumers who thus become part of the authentic system.

Each chapter ends with one or two profiles of people who participated in the project. They are essentially transcriptions of the interviews Weiss conducted with these people, which give the reader a sense of the author’s interpretation process. They offer an honest behind-the-scenes look into the ethnographic kitchen that typically remains hidden from view, adding transparency and giving the reader an opportunity to form her own opinions. The profiles repeat some of the information the author provides in the body of the chapter, but rather than feeling redundant they are helpful as there are a lot of details, facts, and developments to keep track of in this multi-sited ethnography.

Just as the history of industrial hog farming in North Carolina is illuminative of the wider changes in the American food production system, the story of local pig production in the Piedmont could be iconic of other contemporary efforts to reinvent food systems into slow, local versions. The problem is, as Weiss points out repeatedly, that this form of food provisioning is no solution to the vastness of the problems created and perpetuated by the industrial food system brought about by modern global capitalism itself. I do think that understanding local food as product of human actions and networks rather than as innate qualities of organisms or physical places offers hope, for this means local food systems could be introduced and constructed anywhere and by any group of people. I also think the methodical analytical deconstruction of human production and consumption relations, as Weiss has done here for this local food system, might be a promising avenue for exposing and challenging the nature of labor and consumption in industrial capitalist production systems today. Can what we have learned about the people in this wonderful local system help those trapped in the old industrial one?