security and hunger, one from the perspective of economics, and the other from a broader rights-based perspective. As an edited volume, Accounting for Hunger allows for several fine-grained analyses of specific dimensions of food security. In contrast, Timmer’s Food Security and Scarcity draws global lessons from the history of food security, and offers market analysis as a basis for recommendations to economists and policy planners.

In Food Security and Scarcity: Why Ending Hunger is So Hard, Timmer lays out the complexity of global food security in seven chapters. Each chapter builds on a set of key assumptions about economic policy. Timmer focuses on the need for pro-poor economic growth, in particular structural transformation or urbanization, with decreased labor on farms. He asserts again and again that, “historically, the structural transformation has been the only sustainable pathway out of poverty.” (p113, see also xii, p4, 9, 29, 37, 56, 85, 95). Beginning with this premise, he spends much of the analysis looking at ways that such structural transformation takes place (and very briefly on the consequences when such a transformation fails). Not being trained as an economist, I did not understand some of chapter 3, which lays out specific models for balancing control of the market while allowing competition. My own shortcomings as a reviewer aside, a major strength of this book lies in its scope, suggesting some of the ways that the food price stabilization can be achieved at a global level, and not shying away from the complexity of such a feat (i.e. achieving “a guaranteed nutritional floor for the poor” and “secure availability and stable prices in food markets” p31.) 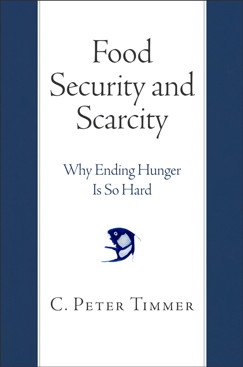 Also to the book’s credit, Timmer does mention failed agricultural transformations, where populations end up in growing urban slums rather than gaining momentum to move out of {material} poverty. Timmer also mentions the lack of transparency of market transactions and large-scale food purchases, and the slowdown of new agricultural research.

However, the assertion that structural transformation is the key route out of poverty is worthy of critique. While Timmer is up front about the Asian bias present in the book, he is less introspective about the potential issues this bias brings to the analysis. That is, without defining the boundaries and exclusions (geographical and historical) of successful structural transformation, I found it difficult to be convinced in favor of “pro-poor” structural transformation. Past successful structural transformation cannot, taken alone, predict the future; climate change and the declining availability of fossil fuels surely opens up the possibility that the future may be different from the past, and that new routes towards food security will be necessary. Narrow conceptualization of material poverty and hunger also masks historical power imbalances, where economists may feel empowered to make far-reaching policy based on their assessments of hunger, without considering the exploitation that has facilitated inequality. This critique notwithstanding, the book offers a good introduction for non-specialists (undergraduate and graduate) into the issues and complexities of global food security.

The editors of Accounting for Hunger begin by offering a summary of the challenges and relationships between urban food supply and rural agriculture, emphasizing the need to consider the imbalances of power in food systems, with particular attention to farmers. Thereafter, the book is divided into two parts. The first focuses on power imbalances in food systems, with three chapters focused on agribusiness (Cordes), food retail (Cowan Schmidt) and Biofuels (Cloots). The second part focuses on the role of trade and aid in creating an international environment that promotes the right to food. De Schutter begins with an overview of the policies that govern international aid and the ways that these tend to overlook their role in promoting the right to food globally. In the three chapters that follow the authors focus on rich-country agricultural subsidies (Mersing), the legal recourse in relation to the WTO (Konstantinov) and recommendations for food aid (Moreu).

Rather than review each chapter, I would like to highlight a few chapters as good potential assigned reading for particular issues in food security. In chapter three, Cordes offers attention to the relationships between biodiversity, mono-cultures, and trade agreements. She also weaves in studies of GMOs, farmer suicides in relation to debt, and the need for transparency in agribusiness. Schmidt offers key insights into the disproportionate burden borne by smallholders and small farmers when forced to compete on global markets. Cloots’ chapter on Biofuels offered a very helpful introduction to the ways that biofuels shapes the commodities market. She argues that the current orientation of the biofuels market tends to infringe upon the realization of rights to food in developing countries, and deepen the bargaining disadvantages of low-and-middle income countries. Cloots effectively weaves the relationships between food security, land use, climate change, energy needs, and biodiversity. In chapter 6, Mersing considers the complexity of phasing out rich country agricultural subsidies without increasing hunger amongst the very poor. Here is where the complexity of artificially low prices for commodity food is juxtaposed with the need for these low prices given low wages and unemployment in low-and middle-income countries. The final chapter guiding food aid recommendations is clear and concrete, and lays out the intersections between food aid, the agricultural decline of recipients, and the muddy waters of motivations of the nations providing aid.

In recent years, the focus on global hunger has shifted towards at least some consideration of local food environments and framing food security in terms of healthy foods—not only caloric sufficiency. The complexity of intersections between obesity and hunger deserved at least some consideration, as it has important implications for policy, including health policy amongst the growing populations of urban poor.

Both books frame hunger as primarily an issue of poverty, rather than an issue of agricultural production (though Timmer believes agricultural research and improved yield is a key part of food security in the future). Both books also highlight small-scale farmers

in the effort to improve global food security. One concrete point highlighted by Timmer is that farm sizes should increase somewhat to facilitate greater food security. Rather than advocating for large commercial farms, his argument is for moderately larger family smallholdings that would allow for more efficient household production and better local supply. This is consistent with chapter 3 of Accounting for Hunger, where Cordes highlights the ways that smallholders and small-scale market farmers currently shoulder disproportionate burdens of risk. However, while Timmer represents the market as a neutral force, the authors of Accounting of Hunger are much more willing to delve into the ways that powerful corporations may stack the odds against smallholder farmers. Both volumes highlight that higher food prices would not serve smallholder needs, as most smallholders are net buyers of food, and are at most risk for food insecurity, symbolizing the complexity of creating more equitable food systems.