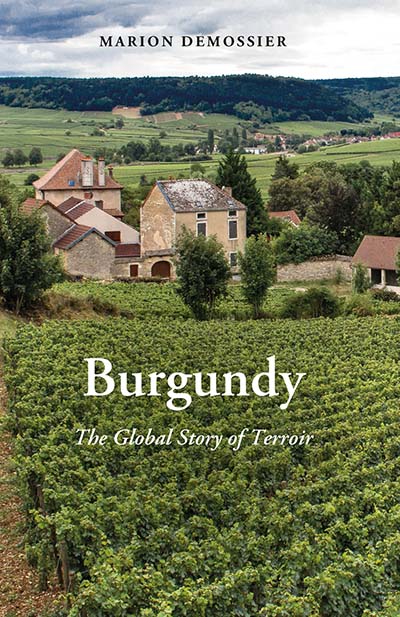 Marion Demossier’s   engrossing analysis of Burgundy—the wine, the place, the brand—should be imbibed (pun intended!)  on many levels—and slowly, for best appreciation.  Terroir, the particular way the specific characteristics of soil, geography and climate affect the taste of wine (and other foodstuffs),       is the focus through which Demossier  examines the history, branding, and rebranding of Burgundy wines.  She also delineates the changing social structure of production over the centuries into modern times.  It is also the prism through which she explores the ways in which that evolution is affected by French history and politics, marketing within France, marketing internationally and in comparison to other wines, especially New Zealand Pinot Noir. She also delineates how Burgundy wines are marketed in non-European markets, in particular Japan and China.

Throughout her work, Demossier situates this evolution as a creation of a myth about Burgundy and its cultivation, engaging in the larger question of what constitutes authenticity, in this case, of a particular wine. Furthermore, as part of her study, she addresses her own journey as a female anthropologist in an overwhelmingly male field of study and industry.  Lastly, she speculates about the future of Burgundy as a brand and example by itself and in relation to other wine and food products sold internationally.

Burgundy is seen as a terroir brand, with even more specific reference to climats,  specific special vineyards. The  Burgundy region  is seen as a place “blessed by the gods (p.91)”  Demossier recounts a You Tube clip promoting the region’s attempt to apply to UNESCO for world heritage status.  In the clip, an actor dressed as a monk tells the story of Burgundy, the wine and the region.  Briefly, the actor /monk goes back to the Romans and then to the Benedictines.  The latter “’…tasted the soil…(p.91.)’” What constitutes the Burgundy brand is what Demossier shows through the story of one winemaker:  “…a complex fabrication of authenticity throughout the commodity chain, which in some cases resonates or imbricates into a global and hierarchised [sic—UK spelling is used throughout her work] world of values (p.73.)”

Demossier devotes Chapter 3 to “The Taste of Place.”  “Taste, colour  and nose were emphasised  as central to Burgundian wines…(p.81.)”  She is following the lead of Amy Trubek about terroir: “In her seminal book The Taste of Place: A Cultural Journey into Terroir,   Amy Trubek defines terroir as a ‘foodview’, that is to say a food-centred worldview understand their relationship to the land.  (Trubek: 2009. Cited by Demossier p. 83.; see Bibliography)”  As Demossier notes, Trubek situates terroir in France and “…underlines the role that institutions and social practices play in shaping the ways taste comes to define place and vice versa (p.83.)”  Yes, there is still definitional controversy about exactly what terroir means, as Rachel Black notes (2012; 12-13). But taste (and smell) is crucial to understanding how people connect to food (see Sutton 2010: 211 et seq.)

The “myth” of Burgundy wine is many sided, connected, and evolving, in part to meet market needs, historical forces in France and the world, and the ways in which it has been produced over time.  In France,  specific wine types are regulated by the government.  This regulation changes over time.  It is designed to brand and give authenticity to a particular terroir and cru—a vineyard producing  a wine of high quality.  The myth then “demands”  the authenticity of government labelling.  It  also “demands” a “philosophy” of taste, and that philosophy includes a picture of who produces it and how it is enjoyed (p.97 et seq. ) One novelist, Elizabeth Knox, ironically points out the contradictory notions of the components of authenticity.  A New Zealand visitor (where wine is being made in the most modern conditions [Demossier 201:271])concerned about cleanliness in her/his visit to a winery in France,  is told by the  tour guide: “‘Since when was wine all about hygiene?’ (Knox 2000:281.)”

The iconic image developed for  the Burgundy brand is of a vigneron—the person who makes the wine, the diners who drink the wine, the setting in which they drink it, and, of course, the food that accompanies it. As noted earlier, taste–and sociability p.103) are the tropes of the brand—with a background of the wine grower close to the terroir producing this mis en scene. And, as Demossier notes, until recently, the vignerons were men. Now, many women of the Burgundy families  have made their mark (p.46.)

The reality behind this picture is more complex. Especially in the twentieth century and continuing into the present, different actors play different roles in the production and marketing of the wine.  On the production end, some vineyards had been worked by tractors and then later by hand.  The “hand” workers became workers hired to work the land, often helped deliberately by horses to address environmental concerns.  Initially, the vine growers continued practices from the past.  But younger vignerons, especially women winemakers, concerned with organic concerns and climate change, and having attended higher education and technical training, are setting new directions in Burgundy.  And the  wines they market as a result are redefining part of the brand of Burgundy vintages.

The essence of this Burgundy brand, regardless of the price of the particular vintage, is that it is traditional, authentic, peculiar to a region, and seen as a counter to modernization (even if it is produced using modern methods.) Invited to a wine conference, Demossier  spoke eloquently about this topic: “ …I was able to unpack the construction of a historical narrative around the notion of ‘climats’, a twenty-first century invention, but one that is embodied in imagined notions of an enduring and thus authenticated social configuration (p.232.)”  The evolving  redefinition of the Burgundy brand maintains its authenticity, even with changes  in the nature of its production.  As such, it is one of a series of food products, non-food products, and other events that draw on people wanting what they consider to be an “authentic” experience See, for example, https://www.forbes.com/sites/propointgraphics/2017/04/16/nostalgia-marketing-and-the-search-for-authenticity/#64ff2ec767d6  for a business approach on authenticity, including its relationship to nostalgia, and Little for a specific discussion of what constitutes a dispute about authenticity by a prospective weaving buyer and the native producer of that item   (2019.)

Yet the branding and portrayal of Burgundy as authentic and anti-modern can be seen in a very different light as well.  Asian markets offer a fertile field for drinking Burgundy.  Demossier shows how newly affluent people are drinking Burgundy and other French wine as a mark of modernization and Westernization (p.165 et seq.)  Japan offers an additional dimension in terms of the mythologizing of wine, because much of its introduction into that market came from manga, Japanese comic books which are teaching and story  telling  media.  Demossier notes  South Koreans and Taiwanese  have  been introduced to wine drinking through their manga as well (pp.168-9.) Asian drinking of French wines  as a statement of modernization and Westernization is not an  isolated phenomenon. Whiskey was originally produced in  Scotland.  The Japanese entered the whiskey production market.  But they may have even outsourced that, so that “authentic Japanese whiskey Is questionable “…because of loose regulations…( Risen 2020: D4.)

Refreshingly, New Zealand, especially in its production of Pinot Noir, has written its own branding story, one of regionality, in contrast to  Burgundy’s terroir story (p. 190.)  Like Burgundy’s emphasis on food, in a national presentation which Demossier attended and spoke, the New Zealand industry paired tastings with local food specialties.  “’Marlborough…salmon; Central Otago…thyme, wild rabbit and apricots…the Pioneers artisan food (p.191.)’” And, like the newer vignerons in Burgundy, New Zealand producers are highly educated and experimenting with ecological methods—and including that dimension  in their branding 9p.217.)  Through the acquisition of World Heritage status, the Burgundy myth has achieved world status as a model for  production and marketing (p. 242.)

This excellent book is appropriate for upper division, graduate students and  professionals in a number of fields—anthropology, sociology, wine studies, marketing and business and  women’s studies.

Trubek, Amy.  The  Sense of Place:  A Cultural Journey into Terroir. U California: Berkeley.