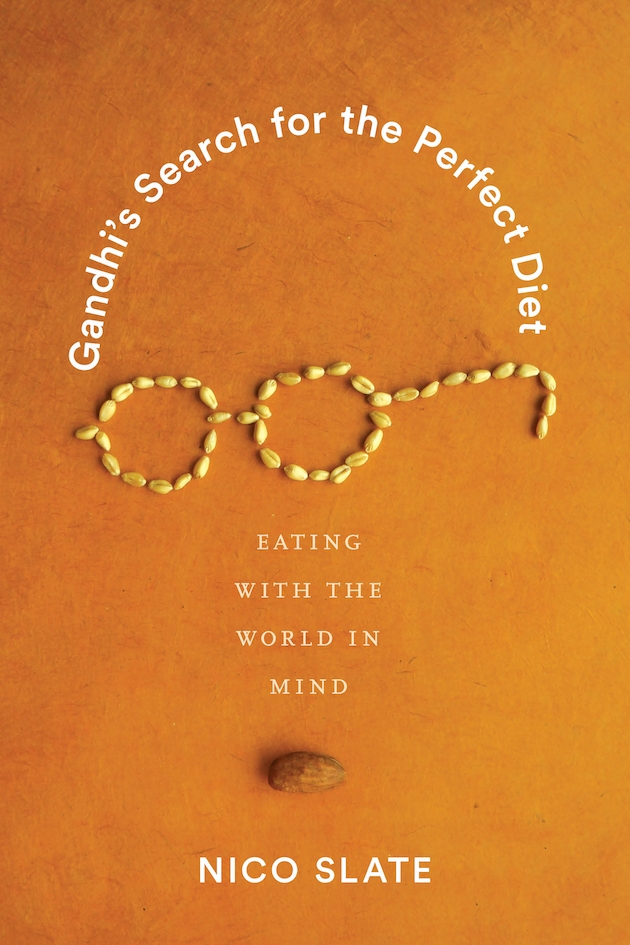 Nico Slate has penned a marvelous and well-written book about Mahatma Gandhi from a unique perspective. He uses the prism of food, of how the Mahatma changed his diet—of what he ate and when-to campaign for political and philosophical ends and to achieve personal perfection. Furthermore, Slate shows how Gandhi was influenced by the evolving experimentation with vegetarianism in England and India–and how that experimentation was itself a political and philosophical movement. In addition, Slate couples his presentation with a discussion of current nutritional research on Gandhi’s diet experiments. He ends by placing Gandhi’s own experimentation with diet and the larger, world-wide one in the context both of political/philosophical/personal growth and reform. Lastly, he provides the reader with several of Gandhi’s recipes.

In each chapter, Slate takes a different aspect of Gandhi’s diet and relates it to his personal struggles and the political issues of that time. To set the stage, Gandhi “… was born into a vegetarian family in Porbandar, India…” in 1869 (2019: xi) Gandhi did experiment with meat because he wanted to be as powerful as the Englishman. According to Slate, a rhyme Gandhi “…learned in his youth”   made precisely that connection (p.46) .

Food was not just a nutritional concern, it was the way to change power and the economy. In terms of nutrition, Gandhi tried to reduce his use of salt throughout his life. He was in part persuaded to do so by watching his wife, Kasturba, get better as salt was reduced in her diet after an illness (p.20.) An important feature, Slate refers to current research on the use of a particular nutritional practice, in this case, salt. Current research on how much salt one can consume, he says, is not clear (p.,20). Gandhi’s most famous use of food to protest British rule was his campaign against the salt tax. This was another key reason that Gandhi tried limit his intake of salt throughout his life. Nevertheless, he saw that others had a need of salt for their diet-and that the British taxed salt and held a monopoly of its production. Slate says that “…[t]he question, Gandhi argued, was not just whether Indians had access to salt, but whether they had a right to self-rule [swaraj]. (p.12).” Gandhi protested the British control by “…picking up a token piece of sea salt from the beach (James 1997:525).”

He had developed  his non-violent, passive resistance approach “satyagraha“ –in dealing with practices he did not like (James 1997: 468). Satyagraha, as James characterizes it, “…was a quality of the soul which enabled an individual to endure suffering for what he knew to be morally right (1997:48).” Gandhi felt that the political and the personal are one; he would test this to its limit.

Slate quotes Gandhi as saying in 1913: “‘…Nature intended man to be a vegetarian.’ (p.47.)” Several questions still remain: should vegetarians pressure others to give up meat? Should vegetarians not eat any meat-related products? In the first consideration, Gandhi said “no” (p.47.) He did not want his practices to seem to take sides and to use force. Rather, they were designed to convince people to change their behaviors. Hindus did not eat meat. But Parsis did, and Gandhi tried to find a middle ground (p.147) .

Gandhi also drank goat milk at times. He used it for strength (see recipe, p.183). At times Gandhi broke many of his restrictive practices, as he was still striving for perfection. He loved mangoes, though later he forswore them. He also had a non-sexual infatuation with a married woman, Sarala Devi Chaudhurani, while he was himself married–and celibate. Despite his refusal to eat some mangoes he had received, he wanted to share them with her (p. 163).Slate notes here, as he does elsewhere, that Gandhi was often contradictory in his search of perfection through food and other practices. Gandhi’s son was so alarmed by his Gandhi’s infatuation with Chaudhurani, that he urged his father to end the relationship (p.163).

Gandhi experimented with his diet permanently as part of his personal evolution and in response to the experimentations going on in European vegetarianism, especially English vegetarianism, in the late nineteenth and early twentieth century. He occasionally appeared before English groups and involved himself in their nutritional disputes. Slate’s Chapter 4, exemplifies Gandhi’s experimentation with raw foods. Gandhi thought raw was best and strived to only eat uncooked meals. He admired Tolstoy, with whom he was in correspondence, and saw him as the ideal to follow (p.132 et seq). Gandhi conversed with many of the important reformers of his time, such as Margaret Sanger; Slate discusses their disagreements at length (p. 24-5).

Gandhi also saw that what one ate could not just lead to perfection but also heal one’s body. As Slate describes at length in Chapter 5, entitled “Natural Medicine,” Gandhi preferred the medicinal qualities of certain foods to much of Western medicine. But he did not reject the latter out-of-hand (p.107 et seq.) and respected its belief in scientific methodology.

Gandhi fasted many times, both for personal perfection and for political change. Slate notes that he had learned to do so in England (p..149 et seq). He admired the suffragettes’ use of the tactic. He had employed it in South Africa and then later in India. He used it to help a strike of Indian laborers and also to atone for one of his son’s unfaithfulness with another woman (p.150). His experimentation was both an end in itself and a tactic. He even admitted that he would fast on any pretext (p.151). His major fast, to try to bring civil peace in Calcutta after WWII, was emblematic of his approach: he “…told a group of Hindu demonstrators to ‘go immediately among the Muslims and assure them full protection.’ (p.160).” Unfortunately, as Slate notes, the civil war between Hindus and Moslems, which includes the fight over cows, has escalated (p.175) to a point where the present Hindu -led government in India had decided on an active program against Moslems (Filkins 2019).

Throughout the book, Slate shows the imperfections and attempts at perfection in Gandhi’s practices. For example, Gandhi did not always address race as a primary concern while in south Africa and had mixed feelings about eating mealie pap, which the black south Africans ate (p.132.) He also did not completely take on the issue of caste till later in life (p.158) . Yet he addressed the issues of the food chain and its exploitation of certain groups when he refused to eat chocolate in part because of the servitude of its growers (Chapter 2).

What Gandhi wanted was a peaceful world where people grew their own food–“a radical vision of food democracy (p.173) . That was the purpose of his various agricultural experiments, like his farm in South Africa and his ashram in India.

Slate ends his discussion of Gandhi by relating Gandhi’s struggles with contemporary dietary experimentation, for Slate, himself and others. These struggles range from the personal to the political. He contends that it would be ‘…impossible to render Gandhi’s diet a “model” anyone would want to follow–or could, even if they tried (p.171).” Gandhi, he argues, “…strove to resolve the greatest paradox confronting the modern world: many people starve, while others eat too much (p.173).” This has been noted by other observers as well (cf. Wilson 2019: Chapter 1-The Food Transition.) The Norwegian Army, in one gesture, now requires one meatless day a week (Slate 2019:176).

Because Slate focuses so strongly on Gandhi, his diet, his connections with the nutritional movements of his day and with politics, this book is particularly useful for anthropologists, particularly food anthropologists and students of Indian history and society and food history. He presents the reader with an excellent and useful bibliography.   One small correction should be noted: On p. 21, He classifies Sidney Mintz as an historian, not as an anthropologist.