There is unrest in Egypt. And Tunisia. These uprisings are being partly fueled by rising food costs, especially bread. The price of bread is driven, in part, by the price of wheat. And, the price of wheat and other crops has been soaring. This has made investors happy but some governments very nervous. Goldman Sachs recently raised “to 10.0%, from 7.0%, its forecast for investors’ total returns from crop futures this year” and noted that the US Department of Agriculture’s downgraded forecasts may drive further increases. Macquarie Banking Group noted that “2011 would be a year of ‘high prices’ in agriculture and food, with even products not facing extreme shortages seeing knock-on effects” and this would be driven by US biofuel policy, rising demand in Asia, and another year marked by wheat deficits (world wheat production is estimated to be 17m tons below consumption levels). Things look rosy for investors. 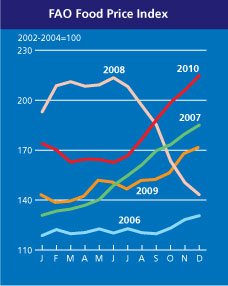 Things look less decidedly less rosy for governments who must now attempt to quell the urban unrest that often rises in parallel with food prices.  In anticipation of rising food prices and hence unrest, Saudi Arabia, Algeria, Bangladesh, and others have all begun to (or indicated they will) buy up grains to increase reserves. This should enable them to keep prices lower, which may serve as a release valve on rising urban pressure. But panic buying like export restrictions can distort markets and fuel further price increases.

And things are likely to be far less rosy for rural farmers. As Lipton and Spitz and others have long noted the pressure of high food prices “is brought to bear on the governments by the .. town [which] carries all the more weight because the towns are the seat of political power. If the government is to stay in power, it must take effective action to check the rise in food prices” (Spitz 1977:28) while “small farmers stay efficient, poor, and powerless” (Lipton 1977:18-19). While some have argued that the urban poor are the “real losers” when it comes to high food prices, Lipton, Spitz, and new analyses all suggest that high food prices are unlikely to benefit many small farmers. In a recent article on Population Development Review, Naylor and Falcon (2011) echo others in concluding that many rural farmers are also poor or ultra-poor and are producing small amounts of food, with even smaller portions going to market. And, contrary to the myth of the self-sufficient rural household, many purchase more than the produce, exposing them to the higher food prices at market. Atop this many of these farmers must also pay out for critical inputs like seeds and fertilizers.

Prices are rising. Rising food prices are good for some. But, they are likely bad for many. And worst for the (invisible) rural poor.

2 responses to “Food Prices and Uprisings”