Fruits & vegetables are just as beautiful as flowers 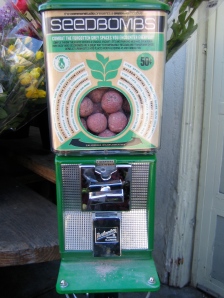 Last year, I planted a new garden in the backyard I share with my downstairs neighbors. One afternoon, we sat down to plan the garden and I put forward the idea of planting vegetables and fruit trees. My neighbors faces wrinkled up: “But vegetables are ugly. I don’t know…” I retorted with another point of view: “Vegetables are beautiful and delicious! What is better than a garden you can eat.”

I imagine that my neighbors had an image of a vegetable garden carefully tended in rows; a working garden is supposed to have a certain geometric order in most people’s minds. Yes, I will say that having rows with spaces between makes the garden easier to tend. However, we did not have much space and that just wasn’t going to work. I suggested a compromise of mixing ornamental plants, flowers and vegetables, along with a few fruit trees. My neighbours were open-minded enough to give it a try.

As I paced the aisles of plants at the garden center, I felt the pressure of having to over turn the aesthetic stereotype of a typical kitchen garden. I had to work some magic to show the beauty of edible plants. Really, it wasn’t so hard.

In our tiny terraced garden, I planted patches of lettuce, tall artichokes in the back, onions and garlic here in there, cabbages, beans in the lower sections and herbs within easy reach from the patio. In late spring, tomatoes went into pots and others were placed where the artichokes had been. The garden was constantly shifting and changing with the seasons. The composter was carefully hidden under the stairs and the fruit flies kept under control. The neighbors still haven’t got their heads around the importance of compost but I am slowly working on converting them into backyard farmers.

Thanks to the mild San Francisco winter we ate lettuce, kale and sorrel throughout the winter. I left large bags of greens at my neighbors’ back door. The cabbage’s graced the winter garden like huge prehistoric purple flowers. Slowly, my neighbor’s were won over by the beauty of the vegetables and as they ate their way through the seasons, they started to understand my point of view. I could see their eyes light up as the onions began to sprout their elegant buds and burst into spectacular blossoms that seemed to just float along the garden. The neighbors declared that the artichokes from our garden were the most delicious they had ever eaten (not to mention they were incredibly beautiful). This time the proof was in the salad bowl–a vegetable garden can be just as beautiful (and certainly more gratifying) than an ornamental garden.

I was very pleased to see it is not only my neighbors that are starting to rethink the aesthetic and function of backyard gardens.  Today there was an article in the New York Times about this very topic:  “Botanical Gardens are Turning Away From Flowers.” This is an important movement because it really does help people reconnect with their food. City dwellers in particular are coming to understand the work involved in producing food and the seasonal variations for fruits and vegetables. Urged on by the economic crisis, people are interested in supplementing the food they buy with items that they grow. There are few people who can be self sufficient in cities but growing food brings people in touch with their environment and raises awareness about the issues that face farmers.

2 responses to “Fruits & vegetables are just as beautiful as flowers”