I ate three pieces of cake on Wednesday. All in the name of research, of course. I took pictures, just to prove how hard I was working. Three pieces of cake is somewhat more cake than I eat on an average day. But Wednesday was Epiphany or Kings Day and in New Orleans that signals the start of Carnival season. And that means we eat king cake. 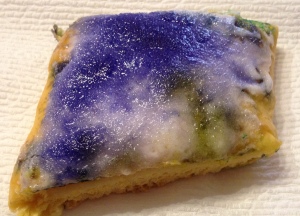 Mardi Gras is, of course, a day (Fat Tuesday is February 9, this year). But at least in New Orleans, Carnival is a season that starts with Kings Day and ends in ashes, on Ash Wednesday. The opening day of the season is marked by a few parades, including the Krewe de Jeanne d’Arc in the French Quarter and the Phunny Phorty Phellows riding the St. Charles streetcar line. We also have an abundance of local and seasonal foods at this time of year. Crawfish are already available all over town, for instance and strawberry season kicked into gear a few weeks ago, so there are plenty of those to be had in the markets. There is great Louisiana citrus around as well. It may seem a little odd, but I would like to suggest that king cake should also be considered a local and seasonal food in New Orleans.

Local and seasonal usually refers to plants that are grown by local farmers and gardeners, especially those plant varieties that are native to the region. Or to species of animals traditionally raised in a region or that are native to the region, including, for instance, heritage cattle or those crawfish I mentioned. Of course, as with many cultural categories, when you look closely, such things can become hard to define. This is true about heritage pigs in North Carolina or about traveling plants like okra or potatoes. The thing, in the end, that makes a food local is that it is important to local foodways. I would subscribe to the idea that if people say something is local, then it is. I realize that this logic can lead to thinking about things like McDonald’s French fries as a local food in Moscow. But why not? As Melissa Caldwell so aptly demonstrates, it is the way in which people lay claim to the food that is interesting.

The same sort of thinking certainly applies to king cakes in New Orleans. The king cake tradition here is clearly related to practices in France, Spain, Italy, and other countries. Long before I lived here, I was introduced to the French galette des rois. The French version I am most familiar with is a puff pastry cake with an almond paste filling and a little figurine hidden inside, most often consumed exclusively on Epiphany (although bakeries make them available for a few weeks before and after that day). The person (usually a child) who ended up with the figurine also got a paper crown. There are several varieties of cake found in different parts of Europe, as well as in Central and South America. Like other globalized foods and traditions, each place makes the practice their own.

King cakes in New Orleans can be found in some stores starting a week or so before Epiphany, but I suspect that most people wait for the official start of the season to get one. They are most prominently featured in a kind of ritual exchange tradition in work places. One person brings a cake to the office to start off the cycle. Cakes are supposed to come with a plastic baby hidden in them (or a bean, or another figure, but a plastic baby is the most common item). The person who gets a piece with the bean is then supposed to bring the next cake to the office. And this exchange goes on until Mardi Gras, after which the cakes disappear for another year. King cake consumption is not, however, limited to the workplace. People bring them to parties, for instance, and the number and variety of cakes on display at even small gatherings seems to increase geometrically as we approach Mardi Gras itself. Sometimes it seems like the entire repertoire of New Orleans cuisine is reduced to king cake and beer during Mardi Gras season, especially for any event involving float decorating, costume making, and parade preparation (for many, Popeye’s fried chicken often adds much needed variety to the typical New Orleans Carnival season diet). And of course, king cake and beer is probably the breakfast of choice for many on Mardi Gras day (one may replace the beer with a Bloody Mary if it is breakfast). King cake consumption really comes to stand for the entire Carnival season, as this advertisement from one local bakery (which I am not endorsing, but they do make very pretty cakes) illustrates with an impressive array of iconic Mardi Gras types.

When I moved to New Orleans, the first king cakes I ate came from McKenzie’s, a now defunct chain of local bakeries that might best be described as a chain grocery store bakery, without the rest of the store. Natives of New Orleans of a certain age can be deeply emotional about the loss of McKenzie’s, which they see as a sign of the passing of those things that made the city unique. The store’s king cake, which I remember as a dry brioche with a modest amount of sweet icing in Mardi Gras colors, was relatively austere (my wife, who remembers these cakes fondly, tells me I am being too harsh). King cakes in this style are still to be found around town and many of my native friends and colleagues claim to prefer them to the over-the-top garish cakes that have come to dominate the market in recent years. Despite the annual protests by nostalgic natives, cakes filled with everything from cream cheese to bananas and peanut butter are everywhere and very popular. The amount of decorative sugar involved is rivaled only by the amount of glitter people in New Orleans use each year on their costumes. These cakes are a long way from the French galette des rois. And they make people very happy.

People here are very self-conscious about the king cake tradition. There are annual evaluations of the best king cakes by our leading food writers. There are stories about the evolution of the cakes, about the entry of different ethnic groups into the tradition, or about the ways in which particular pastry chefs innovate to create cakes that are always more dazzling. There are strange variations on the king cake theme, including king cake vodka (I really don’t think this is a good idea, but maybe you will like it) and the king cake smoothie (from Smoothie King, of course). You can get the French style king cakes around town too – the one pictured here comes from a local bakery that also makes cakes in the New Orleans style. You can now order one to be delivered by Uber, in case you don’t want to leave your house or office. If you don’t live here, bakeries will be happy to FedEx one to you. And there is even king cake satire, including a series of advertisements from the fake Ragusa Brothers Bakery, done in perfect working class New Orleans “Yat” accents, that skewer king cakes and a whole lot more. You can watch the first one, from 2011, below. You have until Ash Wednesday to eat some cake. After that, you should wait until next year.