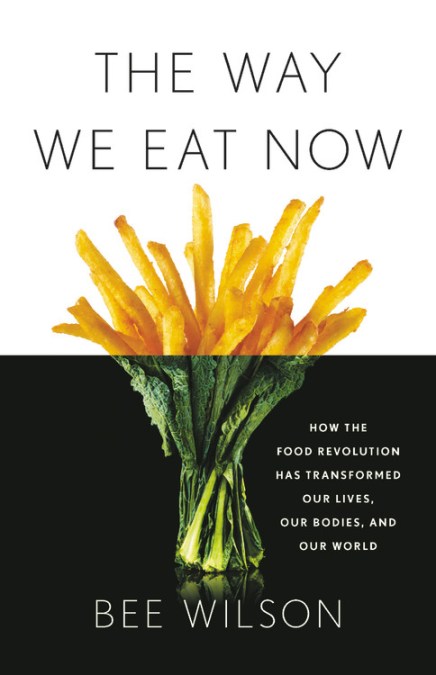 Bee Wilson’s central message in The Way We Eat Now is that since most of the industrialized world now has enough food to eat, it can change its eating and cooking patterns to prevent health risks, particularly diabetes and obesity. She offers a comprehensive solution: eat more tasty vegetables, more complex starches, less meat, snack less food, eat less food overall and on smaller plates and drink alcohol in smaller glasses. And eat with other people as much as possible. A food historian and writer based in England, Wilson discusses these “modest proposals” in a lively and readable fashion for the average reader. She uses research drawn from experts in various fields, supplemented by interviews with other people and recollections from her past. Her analyses are multi-faceted, comprehensive, and provocative enough to encourage more discussion and research among anthropologists and other social scientists interested in all aspects of food.

We are in the fifth stage of food, Wilson argues, one where the average person has not only enough food but an overwhelming array of foods from which to choose. She notes that mega- supermarkets may contain up to fifty thousand items (p.201.) So many overwhelming choices that competing less-choice alternatives such as Trader Joe’s still offer four thousand items (p.210.) Moreover, many of the choices that the shopper confronts in the supermarket, Wilson argues, are filled with sugar and carbohydrates, dangerous nutrients that promote weight related issues in children and adults: “…billions of people across the globe are simultaneously overfed and undernourished: rich in calories but poor in nutrients [sic.](p.5.)” As she notes and as others have noted, there is an increasing risk of Type II diabetes because of these eating patterns (see, for example, https://diabetes.diabetesjournals.org/content/66/6/1432

This all happened in the period since the end of WWII, in part inspired by Norman Borlaug’s “miracle wheat” (Wilson’s term) and “modern farm methods”, which allowed more people world-wide to be fed (p.3.) More food was more available–but at a nutrient and taste price. As with other food writers, Wilson also notes that as people became more “modern,” more attuned to international trendy food consumption patterns, they became more obese and more malnourished (see her comments on South Africa as one example: (pp.13-15.)        Furthermore, major international corporations used this opportunity to promote more sugary, starchy, and salty foods. Children are socialized to begin their consumption of these foods, often starting with cartoon characters on the cereal boxes. Chile, as Wilson notes, banned the use of cartoons in 2016 so as to stop what they saw as a slide to obesity (p.269.)

Wilson contends that many changes in food choices and in how we consume those food choices promote obesity and Type II diabetes. Many people snack more (p. 143, et seq),   and the snacks they eat are often salty high calorie and without much nutrient value. Parade Magazine, a color Sunday supplement available in American newspapers, ran the recipes for three “Slam Dunk Snacks” served in National Basketball Arenas in the country: Cheetos popcorn, Chicharonnes [Fried Pork Belly or Rinds] Nachos. and Crab Fries with Cheese Sauce, (Ashton 2019:14.) The article also featured a website for more “game-day snacks. (ibid.)”

Furthermore, many people have replaced regular meals with snacks (p.143 et seq.) They eat high calorie energy and/or granola bars. And they no longer sit down to a regular meal with family or friends, In Chapter 4, “Out of Time,” Wilson laments the loss of family and group meals and notes how many people squeeze in eating. Within two generations in this new world, people have gone from families eating the same foods to each person eating on her or his own schedule whatever she or he wants. The eating patterns and rituals that served to promote social solidarity have disappeared.

One snack example is instant noodles (ramen.) Wilson notes that despite their variety, they basically have the same ingredients –wheat, salt, and vegetable oil (pp.81-2.) As Han has noted, people in South Korea, especially children, often just eat the dry spices of the noodle packages and eat them alone, and they get them in convenience stores ( 2018:102.)

Of particular interest are some of the points Wilson makes about obesity. India has a diabetic epidemic. People there have experienced a speedup of time to becoming undernourished–within a single generation. Best put it in her words: “…[the thin-fat] babies grew inside their malnourished mothers with phenotypes for hunger but–thanks to the huge changes in India’s food supply between the 1970’s and the 1990s-found themselves eating an unexpectedly plentiful diet (p.57.)”

Similarly, people consume beverages that are filled with calories, often with no other food value. They may be alcoholic or non-alcoholic. They may be milkshakes or huge cafe lattes. Unlike food, these beverages do not satisfy any hunger. Wilson notes that in some countries, such as Mexico, bottled drinks are necessary because of the uncertain water supply. But “[w]ith certain exceptions, our bodies simply do not register the calories from liquids in the same way that we do with solid food (p.64.)”

As noted in the beginning, Wilson does offer both hope and concrete solutions to the problems of obesity and malnourishment. We should eat less meat, more vegetables, less or no sugar, drink more water, and eat more foods from a “traditional” past when possible. We should use smaller plates and glasses. We should eat more communally and snack less. And we should take the time to enjoy our foods. Her final chapter: Epilogue: New Food on Old Plates, sums it up best: “Try to relish a range of tastes that go beyond sweetness…Come to your senses (p.306.)”

This book is useful for undergraduates who would benefit from a comprehensive view of changes in world eating patterns. It is particularly useful for graduate students in anthropology, sociology, economics, nutrition studies, and public health, for the same reasons and for ideas for future research in all aspects of food and nutrition.