Blog editors’ note: This is the summer edition of the Latinx Foodways in North America series, which looks at different approaches scholars use to analyze foods and food production with Latinx communities. If you would like to contribute or know of someone who does work in this area, please contact Sarah Fouts saf817@lehigh.edu. More details about the series can be found here.

Working for the past seven years with Central American food vendors in New Orleans led me to conduct field work in Honduras. In the summer of 2013 and again in 2015, I followed food vendors’ stories to Honduras, staying with their families in places like Tela, Olancho, Santa Barbara, and San Pedro Sula. Like other scholars that conduct transnational research, I was often asked by my contacts (many of whom are undocumented) to take items with me to Honduras to give to their families. Cellphones, clothes, toys, and school utensils took up more space in my backpack than my own gear, but it was worth it be able to offer gifts from loved ones. After each visit, families in Honduras wanted to send me back with gifts, too. Options were limited, especially considering the extreme poverty of the families. Often at the behest of their family member in New Orleans, they sent me back with food, or at least tried.

During both trips, multiple families insisted on sending me back to New Orleans with Honduran cheese. Often just called, “queso,” the cheese is salty, fresh, funky, a little rubbery, and, due to its short shelf life, sometimes difficult to find in the United States. Some Honduran companies have been temporary red listed by the FDA for not meeting U.S. sanitation requirements. But, for Hondurans, queso is essential: it is used in baleadas—a Honduran staple made of a thick tortilla-esque flour shell filled with meat, cheese, beans, and egg. A wedge of queso also accompanies a typical Honduran breakfast, served as a side with beans, eggs, and avocado. When families tried to pack me with large wheels of queso for their relatives in New Orleans, I had to say no, citing my extended travels. Cheese is heavy. And, pungent. 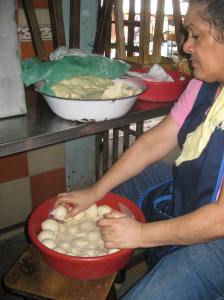 Before I left for my 2015 trip, my friend Julio in New Orleans urged me to meet up with his sister so she could send me back with some t-shirts. We met my last night in Honduras at a bus station in San Pedro Sula. Two people pulled up packed tight on a small motorcycle. In the back, Julio’s sister had one arm secured around the driver and the other gripping a large Tupperware container tied to a luggage rack. As we greeted each other, she passed me her phone. Julio was on the line. “Sarita,” he said in Spanish, “she also has tamales for me.” I grumbled something. He said, “Son lo más sabrosos.” They are the tastiest. “Please,” he begged. T-shirts were one thing, but a container of tamales was quite the ask. I offered to take a small bag, approximately 20 tamales. 80 tamales remained. These were divided up between my Honduran friends hosting me for my final night and some lucky people waiting at the station. His sister, understandably annoyed after having worked hours to prepare each tamal, packed the empty Tupperware, readjusted her grips, and left.

The next morning, I boarded the plane. The tamales made it all the way to customs, where I was stopped because the agents could smell the pork emanating from my luggage. An agent cut into one tamal, found meat, and dumped the bag—products prepared with meat from foreign countries are “generally” not allowed into the United States. Another agent empathized, ruminating about how the smell reminded him of his mother’s cooking. When I met Julio at the airport, I gave him his t-shirts and explained the pork ban. He understood. We decided against telling his sister.

In 2015, I visited the family of Clara, a street vendor based in New Orleans. Clara’s mother, Minerva, lives in a house with dirt floors, no running water, and no electricity in a rural town called Esquipulas del Norte. I arrived in the heart of bean harvesting season—Clara’s family used remittances she sent back to purchase a modest plot of hilly land where they grow beans. Each night during my stay, a cadre of workers would march in after a long day harvesting in the fields, eat dinner, and sleep on the dirt floor. They were up before sunrise. Clara’s stepfather and his crew bring home just 100 to 120 lempiras each per day (about five dollars) during the harvest seasons. The beans themselves feed the family throughout the year. But money from three annual harvests barely keeps them afloat. After my visit with Minerva, she sent me back to New Orleans with a five pound sack of freshly harvested beans. She assured me that Clara would be excited to sample the product of her remittances. When I gave the beans to Clara upon my return, she beamed with pride knowing that her investment provided her family some degree of support and self-sufficiency.

Many of these Honduran products are available in New Orleans. A version of Honduran cheese can be found at the many Latin grocery stores. Homemade pork tamales are ubiquitous, sold in corner stores, soccer games, and festivals. Bags of beans can be found easily as well. But, the products themselves aren’t really what’s valuable. They are just food commodities without the connections to family.

For someone living in the United States without papers, crossing the border or taking a flight outside the country is possible, but getting back into the United States amidst heightened security is precarious and risky. When a major life event happens in their country of origin, like the illness or death of a family member, or the birth of a child, undocumented immigrants find themselves with a tough choice—either stay in the United States and miss out, or go abroad and risk not returning. This restriction is one (of many) of the unintended consequences of immigration reform of 1965, which put a cap on immigration from the Western hemisphere for the first time. But this heightened border control mostly stems from reforms under Reagan in 1986, again under Clinton in 1996, and with unprecedented surveillance under Bush’s “Homeland Security State” established in 2002.

When people are unable to migrate freely across borders—when they are forced away from home due to poverty, violence, corruption and trapped on another side of an imaginary line—a simple dish can represent much more. Food allows people to feel a sense of belonging, to connect place with identity, to evoke nostalgia. Food can also be tangible representations of remittances: the ability to touch, eat, smell the fruits of one’s labor. In these dire times that are plagued with oppressive systems, thankless labor, irrational immigration policy, and racialized rhetoric, food is a way to bridge that distance. A sack of beans can mean a lot.

Sarah Fouts is a postdoctoral fellow at Lehigh University in the Latin American and Latino Studies program. Fouts is working on an ethnographic book project on labor, foodways, and Latinx immigration in New Orleans. For more information, see www.sarahfouts.com.