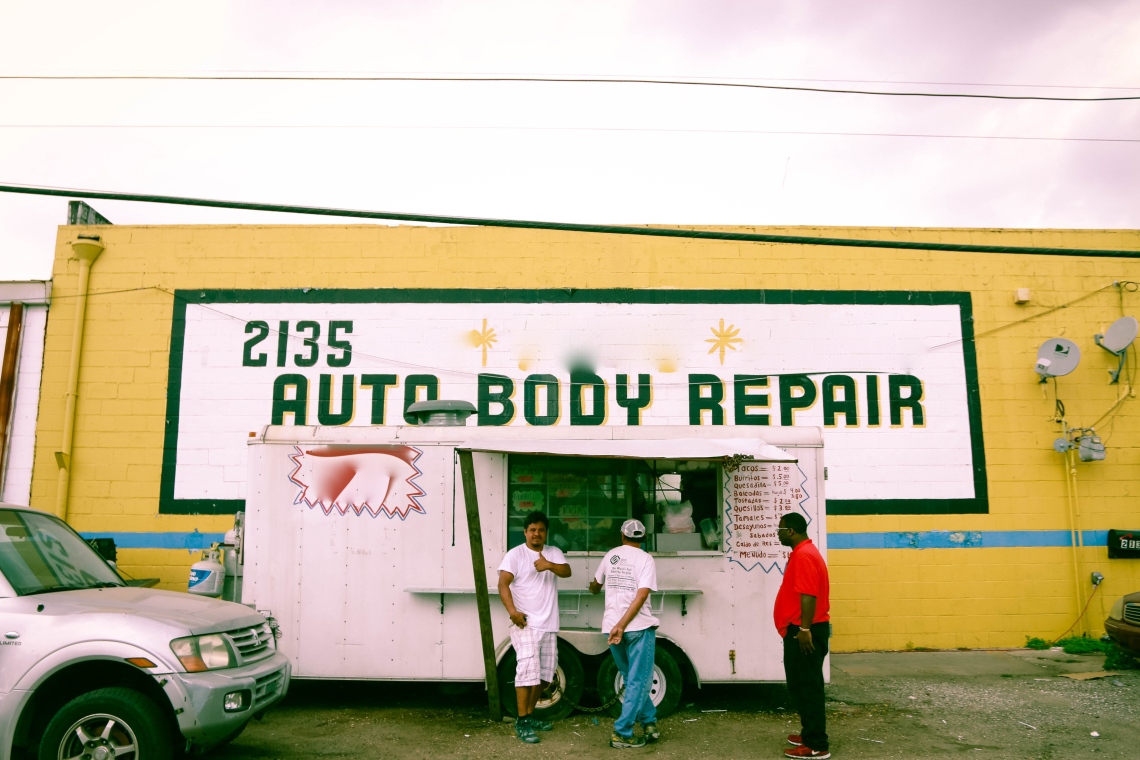 Please note: As Associate Editor, I am soliciting reviews of recent dissertations in the Anthropology of Food. So if you have written a recent thesis or would like to review one, you can contact me directly: Katharina Graf (kg38@soas.ac.uk).

Tacos, Gumbos and Work interrogates the economic and social interplays between migrant food vendors and construction workers – both commonly undocumented – in post-Katrina New Orleans, and situates this synergism within a broader political framework of regulation, law and migration policy. Fouts argues that taco trucks and loncheras provide migrant workers with ‘familiar and sustaining foods’ (p.4) and, as such, she examines the cultural work food vendors perform in the creation of their own economic and political spaces. The cultural work of food is a prevailing theme, but the key contribution of this rich ethnographic discussion lies in Fouts’s illumination of the ways that vendors look to navigate an intrinsically unhelpful and constraining bureaucratic system laden with structural inequities. The thesis highlights the multiple barriers food vendors face in terms of language, their status as undocumented, their access to social networks, and a licensing system entrenched in semantics that does not reflect the needs of the community. It thereby demonstrates how vendors’ economic and cultural capital, in association with their legal status, shapes their capacity for both social and physical mobility: this occurs not only in the sense that those who are documented can be more visible, but is also shaped by the extent vendors have access to knowledge and actors that can facilitate their navigation of ‘the system’. The theme of (in)visibility thus emerges in myriad ways and Fouts teases out the tensions that stem from vendors working in public spaces, whilst remaining in the shadows.

In capturing and comparing the voices and personal biographies of vendors with a range of economic and cultural capital, Tacos, Gumbo and Work successfully shifts its gaze between individual motivations and practices and the broader political and economic dynamics informing vendor actions and decisions. Many of Fouts’s participants are clearly vulnerable and structurally marginalized, yet they are not devoid of agency and Fouts’s sensitive representation stresses vendors’ creativity and entrepreneurial spirit, and their capacity to affect change within the constraints of living and working. This is particularly well illustrated by the manner that some vendors have rejected work in the formal economy in favor of the informal sector – an observation that also offers, as the thesis does more broadly, a seething critique of neoliberal policies and its resultant conditions.

Tacos, Gumbo and Work also raises questions regarding applied research, gender dynamics and social divisions within migrant communities. Below, I put these questions directly to the author, Sarah Fouts, currently a post-doctoral fellow at Lehigh University.

Emma-Jayne Abbots (EJA): Your ethical sensitivity and integrity are clearly evident throughout your discussion, not least in your methodology and in the volunteer work you undertook for your participants and the Congress of Day Laborers. How did you go about balancing your engagement with the community and applied practice with the academic analysis required when writing a PhD? What value does an activist approach bring?

Sarah Fouts (SF): Prior to my academic career, I was a Peace Corps volunteer and worked for a non-profit, so much of my worldview is in applied practice. As an academic I have done my best to extend this commitment to service. While it may seem that an unbiased analysis precludes close involvement, I’ve found that the two can work in concert, and I think it’s important not to take from the communities with whom I work without offering support or service. I was also fortunate to study in my field site, so logistically it was easier to balance the research and community engagement. With the community-engaged work, I had to learn when to say no to volunteer assignments, for instance during intense phases of writing or teaching, and I had a good enough relationship with those folks that they understood. Like I mention in the thesis, I never realized the degree to which my community-engaged work would impact my actual thesis. Once I realized that I could use it as the thread to connect my research, it was obvious that that was the organizing principle all along. An activist approach allows for more collaboration, particularly for people to be a part of telling their own story. For the researcher, accompaniment brings a first hand glimpse into how people navigate systems. But it does more than just understanding the barriers people face, it also helps them get through these barriers by interpreting for them, helping them access other resources, etc. As long as researchers are transparent about their involvement with communities, I think engagement can lend more valuable insight based on first-hand experience than just bird’s eye observation.

EJA: You mention that a possible direction for further investigation is the gendered dynamics at play in this context and, although your argument and analysis takes you in a different direction, there are certainly some interesting ethnographic observations on gender in your thesis. Given the ongoing critical debates about the feminization of food work, can I ask you to reflect upon how your own findings, as well as further scholarship on informal food vending more widely, could enhance our understanding of reproductive labor, especially its interplays with productive labor?

SF: The first five years after Katrina, it was mostly men that came to New Orleans. Women and children started to arrive after 2010, to reunite with their families and as a result of political instability across Central America. Oftentimes, it was the women who recognized the dearth of food options and the market for mobile food vending services. Women also continue to understand the flexibility of the street vending industry and the potential profitability. In many of these cases, reproductive labor directly intersected with productive labor in that women are able to prepare food for sale, while taking care of their children and completing other domestic work. In some of the more clandestine economies, women produce and sell food from their own homes; people would pick up foods directly from the home or someone, oftentimes men, would deliver the foods to construction sites. So in those cases, the women never had to leave home. Your question makes me realize a key part I left out in the case of the two dueling tamale vendors in Chapter Two. I fail to mention that there is free childcare at the Congreso meetings where the women sell food. So, the women could set up their booth and sell foods while their children played inside. This is so important. Pierrette Hondagneu-Sotelo (2007) addresses this to some degree in her work, as does Lorena Muñoz (2013). The feminization of food work comes up throughout my thesis and as I continue on with the book project I plan to engage this concept more explicitly.

EJA: There are points in your ethnography where there are evident tensions between vendors, particularly in relation to battles over turf. In what ways do these dynamics reflect and intersect with hierarchies of economic and cultural capital within the community?

SF: The root of these tensions and turf battles between vendors reflect hierarchies that manifest in terms of access. Oftentimes, this access is connected to documentation status, because there is so much power or perceived power linked to having papers. Like in the case of Clara and Leonora, Leonora can access more spaces as a tamale vendor because she has legal status through her English-speaking husband. She was able to get licensing—albeit a catering license—when Clara was not. But based on the other cases, it is likely Clara could have gotten a license as well (if she called the right person), she just assumed that she could not due to being undocumented. Other examples of turf wars include brick and mortar establishments versus the food truck vendors, which isn’t exclusive to New Orleans. These types of battles usually depend on institutional support as part of the hierarchies of capital. Brick and mortar places received support from the Louisiana/National Restaurant Association to fight for policies limiting the mobility of food trucks. But as food truck popularity grew nationwide, New Orleans City Council increasingly backed more liberal food truck ordinances, yet even those policies had limitations as shown in Chapter Three. One argument I maintain is that many of these policies, even though they may attempt to be liberal, fail to take into account what is happening on the ground locally.

As I continue onto the book project, I draw in a more cross-racial analysis, which reflects integration of Latinx communities in a predominantly Black city and within a New Orleans food culture that is quite homogenous. So, I consider questions like how have Latinx foods been creolized into New Orleans food culture. Here, these hierarchies of economic and cultural capital definitely come into play, especially within a Bourdieusian theoretical framework. But my argument links back to my first statement, drawing in questions of access—documentation status, class, and race. Those issues are inherently linked to these hierarchical tensions.

View all posts by kgraf