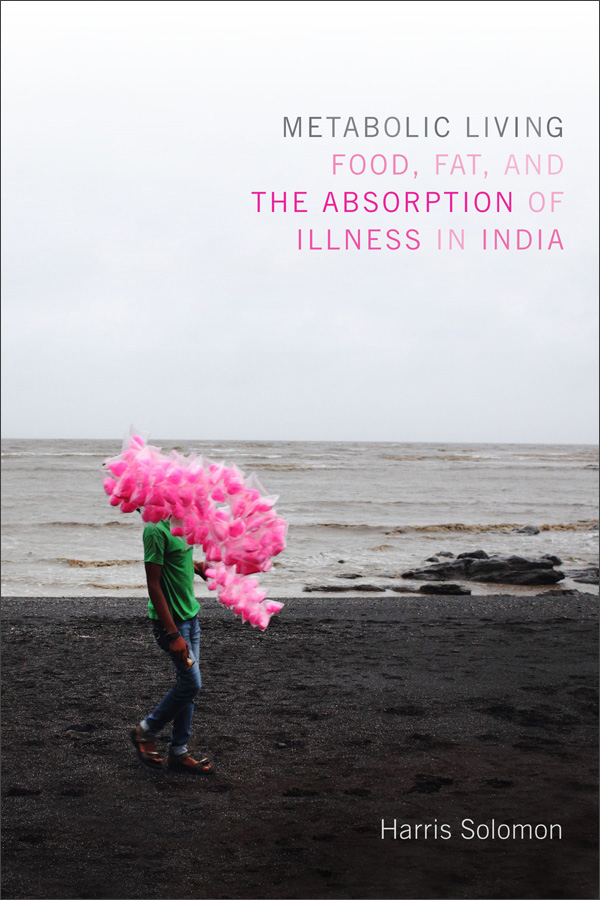 This original ethnographic work studies the meanings and practices surrounding metabolic functions in the everyday life and diet of contemporary urban Indians. Set in the city of Mumbai, the author challenges the reader to question the notion of “globesity”. Such terms loom important in the epidemiological considerations about the sudden increase in obesity and type 2 diabetes in India in the past few decades. Solomon provides the readers with detailed ethnographic vignettes that render his interlocutors as real people with problems and issues connected to city living, the same problems that affect their bodies in turn. Using the concept of ‘absorption of illness’ as the central theme of the book, the author states, “I consider how people make connections between food and urban life to explain that absorption is taking hold as the ground for experiencing and making sense of chronic illness” (Pg. 5).

The book begins with a discussion of the ‘thin-fat’ Indian phenotype, used by scientists to comprehend the current rates of obesity and diabetes in India. Trying to attack the concept of metabolic syndrome from many perspectives, the author generates an ethnography that takes into consideration the problem of obesity and diabetes from several different directions. He carefully begins this book by discussing the Indian thin-fat phenotype. This phenotype, typical of Indians, results in the Indian people having a high amount of central adiposity (abdominal fat). A phenotype resulting from the environment of the womb (connected to the thrifty phenotype theory), this theory suggests that Indians are more susceptible to metabolic disorders. Diabetes and obesity are therefore developmental in origin. Giving us an account of his visit to Dr. Yajnik’s clinic (Dr. Yajnik is one of the two authors who proposed the theory of the thin-fat Indian phenotype), he reports Yajnik’s opinion that there is a need to address the underlying susceptibility of Indian bodies to being afflicted by metabolic disorders, rather than focusing purely on the treatment and prevention of the diseases themselves.  Talking to householders and the other people that he encountered throughout his fieldwork, Solomon plots the changing perspectives in relation to food and the body. He considers the conception of both the food and the body from the viewpoint of doctors, epidemiologists, scientists, nutritionists, housewives, street food servers, and manufacturers of processed food products.

Tracing the historical perception of the problem of diabetes in India, Solomon brings forth the idea of “tenshun”. “Tenshun”, that mental stress which his interlocutors claim, afflicts the mind and predisposes people to obesity and diabetes, is at the heart of the epidemic that plagues contemporary Indians. Hinting at the ever-shifting discussions about bodies, he brings to light the many terms that people use to refer to overweight and obese bodies. This is important because people in India are showing signs of obesity. The words used range from mota (Hindi for fat) to the usage of the English word “healthy” to allude to overweight or chubby bodies. Diseases too are referred to with specific names. Diabetes could be referred to simply as sugar and cardiovascular disease as blockage. Solomon’s aim in discussing these terms is to imply that metabolic disorders have become common enough to form a part of the daily conversations of Mumbaikars. The threat of being afflicted with diabetes or obesity is real and looms large in their minds. This brings us back to the idea of “tenshun”. Through the course of this book, Solomon brings to light his interlocutors’ claims that merely living in Mumbai makes one’s body absorb the stresses of living, in turn creating diseased bodies that suffer from metabolic problems. Every discussion about obesity and diabetes gave way to deliberations pertaining to stress. His participants assert that the stresses of city living affected their diets, the development of their illness, and their body’s responses to such health conditions.

Solomon weaves the chapters of his book together using interludes. These interludes, tangentially connected to the general theme of illness absorption that is so central to this book, are heavily fleshed out ethnographic vignettes about the city of Mumbai. These detailed descriptions talk about the mango madness that endangers the carefully prescribed diets given by exasperated nutritionists. They tell us of the struggles of Manuli (Manuli is that suburb of Mumbai where Solomon carried out household research) locals in attempting to have the governmental authorities take note of their troubles over accessing their share of food owed to them through the state’s ration card. These vignettes transpose the reader to the site of the study. They render Mumbai as a city of multiple communities and provides the reader with a multi-faceted understanding of Solomon’s field site.

The strength of this ethnographic work lies in its multi-pronged approach. Not only does he interact with housewives, so well known as the domestic gatekeepers of Indian households, he also studies and interviews food corporation researchers and marketing heads, whose aim is to float “functional foods” that these very housewives will allow into their homes. By considering the struggle between the concerns about adulteration (milawat) which his respondents focus on intensely, the author discusses the newest fad of “functional foods” which are becoming popular in Indian households. Functional foods are foods created by food companies to render everyday staples healthier. Functional foods promise “extra benefits” because they are enriched with vitamins and minerals. They espouse to function categorically by aiding in the prevention of metabolic disorders. Fast gaining popularity in India, functional foods claim to assure buyers that they will alleviate their health problems. In such a manner, everyday staples such as wheat, rice, flour, and milk become functional foods. In the face of fears about adulteration and metabolic problems, the author demonstrates why and how functional foods are gaining traction in India.

Solomon pushes the envelope on the famous concept of ‘gastropolitics’ put forth by Appadurai and studied by many food scholars since. Using the example of the famous Mumbai vada-paav, he connects street food to the very identity of urban spaces. Focusing on the vada-paav, referred to as the “lifeline of Mumbai” by some of his interlocutors, he pushes forward the concept of gastropolitics to demonstrate to the reader that street food can be reflective of politics, power, and class dynamics within a city. Attempting to trace the origin of the vada-paav, its usage, and its attempted standardization by both political parties and food corporations, the author states, “By moving beyond the confines of street food as a bounded entity, it is possible to map the reaches of gastropolitics into livelihoods, community injuries, dreams of urban renewal, and transnational enterprise” (Pg. 75).

In the latter half of the book, Solomon focuses on the clinical therapies and gastric bypass surgeries taking place in Indian hospitals as the site to study the discussions pertaining to metabolism. While early on in the book he deliberates on the ever-blurry food-drug boundary, in the latter half of the book he acknowledges the necessity of looking at diets as therapy. Shadowing clinical dietary therapists and nutritionists, he demonstrates the daily struggles of both the clinicians and the afflicted when it comes to nutritional therapy.  In a clinician’s office where metabolism is being treated as a site of problem, multiple medical epistemologies collide. As Harris states, “These counseling visits illustrate the power of diets to coordinate the uncertainties of the metabolism” (Pg. 160). In these clinics, the onus is not only on the patient’s metabolism but also on their compliance. Dieticians insisted that patients’ compliance or non-compliance was what affected the result of dietary therapy. The dietician’s office was also a place where functional foods were prescribed to ailing patients. Such clinical therapies involved first measuring the patients’ bodies, both outwardly and internally. Weighing and measuring bodies went hand in hand with blood sugar, cholesterol, and hormonal level test. Through his ethnographic vignettes, Solomon manifests that the Ayurvedic concept of food as medicine is significantly overlapping with biomedical treatments for metabolic disorders. The result is a medical landscape that is vastly varied but one where food takes the center stage when it comes to health and disease.

Solomon concludes the book by considering the idea that “as metabolic illness increasingly occupies global health interest and investment, what is needed is a perspective on metabolisms and their disorders different from one grounded in concerns about overconsumption” (Pg. 228). By tracing the historical food flows, the current shifting foodscape of Mumbai, the food standardization attempted by corporations, the author demonstrates to the readers that metabolic diseases are firmly entangled in social, political, gendered, and historical processes. Harris claims that through his work he approaches the concept of metabolism ethnographically. He states, “My principal concern in this book has been to develop an ethos of absorption at the interfaces between food and living” (Pg. 227).

A wonderfully evocative ethnography, Solomon’s book makes one reflect on the very nature of metabolic syndrome. How does one address the solutions to a health problem that is so closely connected to food? The very food and eating which are sacred, political, social, and emotional.  Metabolic syndrome renders food as a focal point. Food can be addictive, rendering one’s body diseased, or it can be therapeutic, cleansing one’s body from the inside. Through this book, Solomon relays and reflects on this problematic relation, challenging medical experts to consider a multi-layered approach to solving the issues of obesity and diabetes that plague contemporary India.