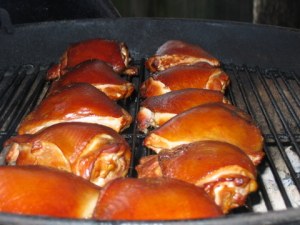 There was a fascinating piece on the National Public Radio news program Morning Edition (on the August 2, 2010 show) regarding the links between human evolution, meat eating and cooking.  Naturally, this caught our attention here at FoodAnthropology.  It featured insights from several anthropologists and was about food.  What more can one ask from a news story?  Read and listen to it here.

There are several points of interest.  First is the idea that eating meat allowed humans to develop the kinds of brains that we have now.  A good idea, but apparently eating the meat raw was not sufficient.  In fact, eating most things raw was more difficult and, in some cases, less nutritious than eating the same things cooked.  Of course, this adds culture to evolution.  Fascinating aspect of adaptation, really.  This is precisely the kind of thing that makes evolution so amazing.  This may be an old insight in anthropology (Claude Lévi-Strauss made some observations on cooking, culture and evolution, for example), but it is not really appreciated by non-anthropologists, I think.

Now, I can imagine that all of this could be considered controversial from some points of view.  Folks in the vegetarian, vegan and raw food camps probably have interesting things to say about this.  They might assert that pre-historic diets of nuts and fruit, eaten raw, were really all our (very distant) ancestors needed.  So why should we need more?  They may make strange assertions about what our guts are designed to digest and suggest that we avoid meat, milk, cooked foods, etc.  The archaeologists and biological anthropologists can show that their view of our ancestors is incorrect, but that may not matter.  They will invent new ancestors.  People love to legitimize their positions through imagined ancestors.

In addition, if you read the comments at the end of the NPR piece, you will see people grappling with another kind of issue: if our ancestors developed big brains by eating meat, they seem to ask, does that mean my kid will get a big brain if he or she eats steak?  Well, no, not exactly.  There is a misunderstanding here between the idea of what is adaptive for populations and what is healthy at any given time for individuals.  Here too, people are looking for legitimacy in ancestors, but the problem is that the units of analysis are off.

The links between diet and evolution—including the choices to eat meat and to cook—were probably not well understood by our ancestors, but they did prove to be adaptive.  Are they still adaptive?  It is hard to tell.  Are they healthy for us as individuals?  You can’t really read that from the evolutionary record.  That said, it seems likely that the manner in which we produce most meat today is not sustainable.  And by sustainable, I mean that it harms the environment in ways that may harm us.  Does this mean we should cease eating meat?  Eat less of it?  Produce what we do eat differently?  I like some of those ideas, but not because I know they will prove to be adaptive in an evolutionary sense.  You can’t really make sense of the world that way—it is too abstract.  Our ancestors started at some point to eat meat and later started to cook it, along with other things.  This proved to be a great idea at the time.  I love grilling meat, so I think it is still a great idea.  But you’ll notice that one of the anthropologists cited in the story is a vegetarian (that would be Richard Wrangham, author of the very interesting book Catching Fire: How Cooking Made Us Human, 2009, Basic Books).  He understands the adaptive nature of meat eating and cooking in the past.  So what does his choice mean now?

You can’t really plan an evolutionary strategy.  You can only tell that what your ancestors did worked at the time.  If our choices are adaptive today, we will have descendants who can look back and appreciate those choices.  I guess that is why it is evolution, not revolution.