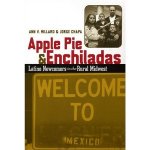 Millard and Chapa’s text on Latino newcomer experiences in the rural Midwest (Ohio, Indiana, Michigan, Nebraska) provides a salient analysis of everyday life of not only Latino newcomers, but also second or third generation Latino residents and the Anglo populace[i]. The title alludes to social cohesion and cooperation between Anglos and Latinos, as people share and consume each other’s iconic foods. Yet beneath this commensality lie a variety of challenges that impede acceptance and parity. This volume examines differences within and between communities, emphasizing the complexities of settlement for newcomers. The authors end the text highlighting local initiatives that were successful in combating challenges faced by Latino communities and improving communication between Latino and Anglo residents, while also recommending structural changes in local and national policies and programs.

The analysis benefits from multidisciplinary perspectives and methods used to explain both recent and historical demographic changes. Each chapter is written by different team members, including graduate research assistants. Eileen Diaz McConnell wrote a thorough and enlightening chapter on the 20th century historical context of Latino migration in this region. It is particularly disconcerting for readers unfamiliar with this history, to recognize how often Latino migrants were welcomed and then shunned in the last century. One problem underscored throughout the text is that Anglos see Latino immigration to the region as a new problem, unique to the last decade or so. Because of this attitude, there appears to be a lack of recognition or awareness among the general Anglo population that there are members of the Latino community who have resided in the area for generations—even longer than some in the Anglo community. Simply educating local communities of this history and of how settlement experiences are similar and different among recent and previous immigrants seems to be an important piece of information for improving understanding, and thus supporting integration and settlement of newcomers. Of course there will be a variety of responses from within the Anglo community, but a series in local newspapers may an effective means of imparting this knowledge. This lack of awareness of the history and context of Latino migration to the Midwest can also be understood within a framework of racism and institutional discrimination. This is explored in the religious, educational and employment sectors.

While the authors make a clear argument on how discrimination affects the everyday lives of Latinos, they are careful to avoid polarizing the description of these communities along ethnic lines by identifying many ways the Anglo and Latino communities are each differentiated. First, both communities make distinctions between those who have resided in the community for a short time versus a long time; the time dimension varies though, between the two communities. For the Latinos, newcomers—those who arrived since the mid-1990s—are compared against 2nd or 3rd generation Latinos while in the Anglo community, “old-timers” are those whose local family history stretches back as long as five generations, and “newcomers” may include people who have lived in the community for decades. Second, religious affiliation has been a marker of difference within the Anglo community: Catholics and Protestants rarely intermarried, and while this taboo has diminished, religion continues to mark difference. Although there are Pentecostals and Catholics within the Latino community, the importance of this indicator seems to be less prominent within the Latino community. Interestingly, there appears to be little unity within the larger Catholic community; Ann Millard and Ken R. Crane document the social spaces of churches, and the lack of acceptance by many Catholic Anglos of Latino Catholics and their practices. This is illustrated with the uproar over installing a statue of the Virgin of Guadalupe, as described by Maríaelena D. Jefferds and Ann Millard. Third, the Anglos differentiate themselves according to place of residence and occupation—farmers versus townspeople. Finally, social class marks difference within each group, although within the Latino community poverty is very common amongst the Latino newcomers.

The poverty experienced by so many Latino newcomers has an important role in the discriminatory stereotypes held amongst some (many?) of the Anglo community; Anglos hold Latinos responsible for their poverty, for the decline evident in some of these rural communities. Anglos consider their own family histories of migration, with the common story of struggle followed by success—achieving the American Dream. Thus there is little awareness of how the contemporary challenges differ. Understanding the reasons for the financial distress faced by so many Latino newcomers necessitates looking to structural factors. The authors provide a convincing description and analysis of how key institutions and national immigration policies generate local conditions that perpetuate poverty, making economic hardships so difficult to overcome for arguably the majority of Latino newcomers. First and foremost are the jobs available to the Latino newcomers; these are in food production (i.e. farm work and food processing). Maríaelena D. Jefferds and Ann Millard document the trying working conditions that mirror other recent work on factory farms and food processing facilities (e.g. Stull and Broadway 2004). Latino workers are recruited because they will work for minimum wage and no benefits. The authors make a strong case showing how these conditions propagate a growing economic gap between the Latinos, who are working poor, and the Anglos, who expect everyone to maintain middle-class standards, yet seem unaware of the working conditions the Latino newcomers face. But this situation can only be understood in the context of national immigration policies (e.g. guest worker programs, the historical contexts leading to undocumented workers, etc.). The authors do an excellent job of showing how local and national policies shape recruitment and wages.

My one critique is that the title and opening section led me to believe that food would be central to explaining how Latinos and Anglos connect and differentiate through kitchens and food sharing or refusal. Instead, the focus of the text was on how subtle and covert racism and institutional discrimination shaped everyday lives, particularly in the milieus of church, school, and place of employment.

This text would be an excellent choice in upper division undergraduate, as well as graduate classes. In particular, I appreciated the thorough description of methods including the appendices that provided the interview guides. This would be very useful for students, as they consider how to approach their own research questions. Ann Millard and Jorge Chapa provide an excellent model of inclusion and collaborative research, including co-authoring chapters with graduate students. Most importantly, the authors interweave the local and national contexts in a convincing and outstanding manner, including important policy recommendations. This text is even more important today, given the recent contentious discussions and debates on immigration. In sum, this is an important work to situate both local and national contexts of labor migration.

[i] I follow the terminology utilized by the authors, where Latinos predominantly included Mexican Americans and Mexican immigrants, and Anglos refers to people of European descent, who are U.S. citizens. This group descended primarily from German, Belgian, Dutch, British, Scandinavian and Slavic immigrants. See pages 18-20 for further explanation on the terminology used in the study.