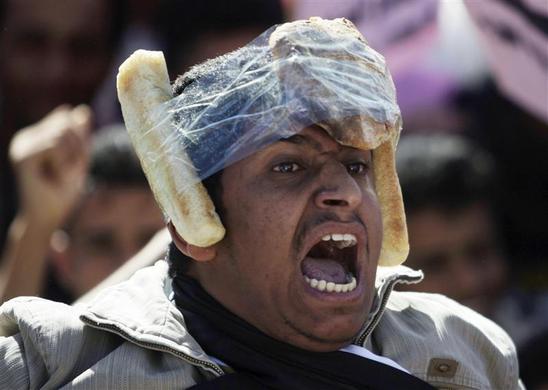 File it under “strange and unusual.” That’s what Reuters did in putting up the photo of one of many Yemeni protestors who made the link between food and politics explicit. The usually stuffy journal Foreign Policy was also taking notice, as a “first-ever food issue” featured articles on “The Baguettes of War” and “Eat, Drink, Protest.” shows how unstrange and usual are the actual connections between food and protest.

This is a picture of Thedoros Pangalos, the portly deputy prime minister of Greece who recently claimed that all Greeks have to pay for the current financial Crisis because “we all ate together.” This expression intrigued me, as it showed the different metaphors used in different countries in Europe to express the idea of sharing the blame. In Ireland, the claim was “we all partied,” whereas in the U.K. it was the more anodyne “we’re all in it together. The food theme, however, resonated in Greece. In Athens in May of this year protest over the so-called “debt and IVA crisis” was not framed explicitly in terms of food issues. Taking their inspiration from protestors in Spain, Greeks gathering in the central Constitution Square dubbed themselves the “outraged,” to express their frustration with a political system and a global economic system that had led the country to hopeless solutions that punished ordinary people without touching the wealthy that had brought the system to its current state. But protestors were quick to respond to Pangalos’ claim: after a man wearing a mask of the deputy prime minister repeated the line to the crowd of thousands, their response barely missed a beat: You lying bastard!” They roar back. “You’re so fat you ate the entire supermarket.”

During this time I was involved in my ongoing  research project on changing cooking practices on the island of Kalymnos, one of the Dodecanese islands in the Eastern Aegean. While there were not protests in the streets of Kalymnos as yet, the financial crisis was much on peoples minds as they commented sardonically on the exploits of Dominique Strauss-Kahn as Kalymnians went about their daily cooking,and shopping, or held debates via Facebook about the implications of the “Argentinian model” for Greek default. The implications of the crisis for food practices was seen in debates over whether “tradition” could see them through hard times, with some suggesting that a return to the “old days” of beans 5 days a week and everyone gardening was the proper response; and indeed, rumors were in the air that many Athenians were returning to their natal villages (or their parents or grandparents natal villages) to go back to the land. Others insisted that Kalymnians were now too addicted to meat to contemplate a different diet, but that the circulation of cheap cuts of meat due to the growth of multinational supermarkets on the island meant that people needed to be more calculating shoppers. This intrigued me because shopping  has always been a moral act on Kalymnos in which one balances obligations to friends and neighbors and the specific circumstances of shop owners—at this store, the parents were trying to send two kids to University, at that store the owners are Communist so they should/shouldn’t be supported—with a sense that good shoppers don’t allow themselves to be taken advantage of. Was a different social morality of shopping in the process of emerging? Not everything was “new” however, as many Kalymnians pointed out to me that the financial crisis had led to the return of the “debt” (verese) system of keeping books of accounts at small grocery stores, indeed this helped those smaller stores compete against the big supermarkets that didn’t offer such amenities. Debt with a small “d” meets debt with a capital “D” in contemporary times. Both for Kalymnians and for the Athenian protestors food remained a key idiom and practice to think through some of the outrages of our contemporary political-economic system, even sometimes in cannibalistic terms. As The Guardian reported:

“Politicians now walk around with bodyguards,” says Aris Chatzistefanou, the co-director of Debtocracy, a film about the Greek crisis that has become a sensation. He quotes a newspaper report of how restaurateurs are taking down those cheesy framed photos of dining politicians, of how one government spokesman went to dinner a few weeks ago only for the rest of the restaurant to start shouting “You are eating the blood of the people”.